Elle is holed up in an exclusive retreat where women pay thousands to mimic her extreme lifestyle, or die trying. But who’s bankrolling Elle’s new empire?

Abi just wants to marry her true love in the garden on New Year’s Eve. But her ex-husband is building a financial cult in the shed and her teenage daughter’s YouTube channel is gaining followers for all the wrong reasons.

Frances has a newborn and a WhatsApp mothers’ group that’s giving her anxiety. But she’s certain that if she can just be more like those fitmums on Instagram, things can only get better.

Enter the world of How to be Perfect… fake gurus, green smoothies and bad influences included.

We have all seen those Instagram posts, read the blogs about positivity and how wonderful life is but what’s the reality? Holly Wainwright brilliantly captured the two opposites in her novel How To Be Perfect.

She gave us a myriad of characters all looking for perfection, or looking to unmask the perceived perfection.

Frances was the most real of all the characters, the one we could all most identify with. The new mum, who felt fat and frumpy, her identity lost in nappies, feeding and sleep deprivation. We’ve all looked for that miracle cure, spent money on potions and lotions and Frances was no different. I loved her transformation as she visited Elle’s retreat, the slow realisation that perfection didn’t exist, that social media was a front to hide the cracks and the realities of life.

As for Elle, the clean loving guru, you had to laugh at her implausible truths, at the drivel she fed her followers, in her ruthless pursuit of money and selfish gratification. You wondered if she had a heart, if behind the hardened exterior there was one softer and more real waiting to get out.

Abi was also ruthless but in a different, kinder way although her obsession at bringing down Elle sometimes made her seem just as bad. Her family provided the fun factor of the novel, the numerous children running wild, the daughter a YouTube sensation and the ex husband in the shed gave many laughable moments.

That was what I so enjoyed about the novel, the humour laced with the serious, the fickle world of social media exposed. It was also perhaps a cautionary tale of never believing what you see, that reality is often very different and accepting that there are two sides to every story.

I am hoping that Wainwright has other adventures awaiting Abi, Elle and Francis as I loved their chaotic and interesting lives.

I would like to thank Legend Press for a copy of How To Be Perfect to read and review and for inviting My Bookish Blogspot to participate in the blogtour. 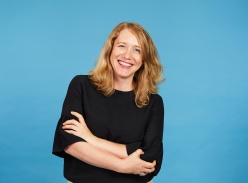 Originally from Manchester Holly lives in Sydney, Australia. She is a journalist and editor, originally  working in travel and celebrity magazines and now online as Head of Entertainment at Mamamia. Holly hosts a parenting podcast and has two small children.