With just one look, she knows how and when you will die . . .

Nothing surprises Adam Brandt anymore. As a forensic psychologist, he’s seen and heard everything.

That is, until he meets Kassie.

Because she claims to have a terrible gift – with one look into your eyes, she can see when and how you will die.

But then a serial killer starts wreaking havoc across the city, and only Kassie seems to know where he’ll strike next.

Against all his intuition, Adam starts to believe her.

He just doesn’t realise how dangerous this trust might be . . .

Saturday March 16th was awful, the rain came down and dumped half a month’s rainfall in one long dreary day. The only thing that made that wet, gloomy day bearable was M. J Arlidge’s A Gift For Dying. So immersed was I in its pages that I soon forgot the rain outside and instead fell in love with the young vulnerable Kassie, all alone and frightened by her terrifying gift of seeing death in the eyes of those she met. All you felt was her frustration, her yearning to be believed and taken seriously, for someone to tell her it was ok and that they would help her. She was feisty, strong willed, and brave and it was hard to believe that she was only fifteen years old, so mature did she seem.

Her only friend was respected psychologist Adam Brandt, a man who had the perfect life, but that didn’t stop Arlidge from turning his life upside down. The intricacies of Adam and Kassie’s relationship was one of the highlights of the novel as Arlidge brilliantly portrayed a man conflicted, a man whose scientific and professional mind told him her gift was absurd yet events showed him otherwise.

Those events were definitely not nice and not for the faint-hearted or squeamish and it sent chills down my spine and as darkness closed in outside, I found myself glancing around just to check I was alone!

Kassie and Adam’s desperation intensified and just when you thought they couldn’t endure anymore Arlidge piled on yet more anguish and horrors. Not only did he pile on the anguish but he sent my head in a veritable spin as I tried to work out who did what, and where Arlidge would take me next. At times I wasn’t sure I actually wanted to go there but then there were moments when I couldn’t read fast enough so desperate was I to discover the next twist and the fate of Adam and Kassie. It was the unpredictability that I admired hugely and the fact the novel wasn’t wrapped in cliche’s, didn’t follow the normal formulaic route of so many novels in the genre, its narrative punchy not mired in needless in-depth descriptions, instead succinct and to the point as if to emphasise and convey the heightened drama and tension.

Arlidge saved the best until last and I thought I knew what would happen, how it would unfold, but I wasn’t quite prepared for how Arlidge delivered those last few nerve wracking, drama filled scenes.

I can only suggest that you beg, buy or borrow a copy of A Gift For Dying as soon as you can.

I would like to thank Michael Joseph for a copy of A Gift For Dying to read and review and to Tracy Fenton at Compulsive Readers for inviting My Bookish Blogspot to participate in the blogtour. 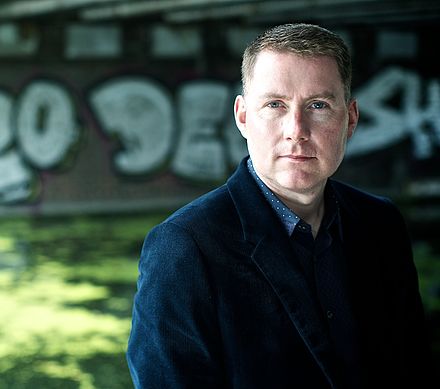 M. J. Arlidge has worked in television for the last twenty years, specializing in high-end drama production, including prime-time crime serials Silent Witness, Torn, The Little House and, most recently, the hit ITV show Innocent. In 2015 his audiobook exclusive Six Degrees of Assassination was a number-one bestseller. His debut thriller, Eeny Meeny, was the UK’s bestselling crime debut of 2014. It was followed by the bestselling Pop Goes the Weasel, The Doll’s House, Liar Liar, Little Boy Blue, Hide and Seek and Love Me Not. Down to the Woods is the eighth DI Helen Grace thriller.