Is it possible to keep secrets in the age of social media? When someone lives their entire life in the spotlight, what could they possibly hide from you? Ideal Angels explores just that. It s the story of one man, one woman, one week. They meet, fall in love, and never look back. Eloise s phone is never far away, furiously cataloguing their ups and downs. But there are always shadows, lurking just out of reach. The moments after the camera flashes, unseen, uncaptured. The threat of an inescapable doom. How much can one person change you? How much can one person be your downfall?

Social media, most of us have it, and use it everyday, but how much is too much, should every single part of lives be documented and posted online? Ideal Angels, didn’t try to answer these questions, but provoked the reader into thinking what they thought the answers should be.

So, how did Mr Welbourn achieve this? What he did and did very well was to take one lonely young man, who liked a drink, and I would say was just a little bit vulnerable, and definitely ripe for change, and excitement, and threw him at the mercy of a young confident, and very attractive woman. Their meeting ignited a flame inside him that he had never felt or not felt in a long time, and we, the reader were witness to those consequences.

The narrative was sparse, yet descriptive, reflecting the speed of the relationship and the events, almost like we were on a collision course but not quite sure what the destination would be.

Eloise, the young woman, was to me overbearing, and over confident, I wondered if her feelings were real or just an act, acts that were posted on every conceivable social media app. I found myself frustrated with both of them but for entirely different reasons. For him, I wanted to sit him down and talk to him, tell him to wake, to see what was happening and get a grip. For Elosie, I disliked her intensely, questioned her motives, and wanted to the snatch the phone out of her hand and throw it away. It is to the authors talent, that my feelings were so strong and it was almost like watching a scary TV drama, your hands over your eyes because you did not want to see what would happen next!

The latter parts of the novel put me in even more of a quandary, as I glimpsed tiny fissures of the real Elosie, a sense of her true feelings and emotions very much based in the real rather than the virtual world. Our protagonist had a past and things slowly began to make more sense, you began to question your feelings toward the two characters, your dislike and frustration turned a little more towards compassion and positivity.

You almost knew things would not end well, but were not sure how the author would get us there and that was what made this such a great novel. It may have been a novel of few pages, but it packed a veritable punch. I loved that it challenged my own views about social media and how I use it without preaching to me. It was an eyeopening social commentary on the world in which we reside, a world that is forever changing and not always for the better, it was simply brilliant!

I would like to thank Unbound Digital for a copy of Ideal Angels to read and review and to Anne Cater for inviting My Bookish Blogspot to participate in the blogtour. 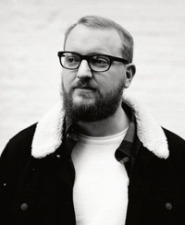 Robert Welbourn is Yorkshire born and bred – he’s lived there almost all his life, and now written a book set there. He’s had a passion for books as long as he can remember, and has been writing his whole life. His favourite authors are Bret Easton Ellis and Stephen King, and he cites Ellis as his number one influence.