When an American war correspondent’s murder is concealed by British authorities, Maisie Dobbs agrees to work with an agent of the US Department of Justice to help an old friend discover the truth. With German bombs raining down on London, Maisie is torn between the demands of solving this dangerous case and the need to protect a young evacuee. And what will happen when she faces losing her dearest friend and the possibility that she might be falling in love again?

I have resisted Maisie Dobbs for a long time, despite being urged to read by my library colleagues and customers. I always thought gentle crime would not be for me, not able to satisfy my quench for blood and gore. When I was invited to take part in the blogtour for The American Agent , I thought, what the heck, let see what Maisie Dobbs was all about.

To say I was pleasantly surprised would be an understatement, as I found myself completely enthralled by Winspear’s narrative and her characters.

So, who was Maisie Dobbs? There was obviously a lot of Maisie’s past adventures that I had missed and the odd bits of background information, but that made no difference to my enjoyment of the story.

What I did like about Maisie was her stoicism, her pedantic doggedness in pursuit of a murderer . She more than stood up for herself in a male dominated environment but not to the detriment of her femininity, as her emotions and struggles lingered just below the surface, making Maisie immensely likeable.

What you couldn’t get away from were the horrors of the London Blitz, of the constant fear experienced by its inhabitants, nor the hardwork of the volunteers, Maisie included, who worked tirelessly day and night to rescue and save those affected. Winspears, descriptions were wonderfully vivid,the images lit bright in your mind, the acrid smells and smoke tangible on the pages.

The murder of the young American journalist wasn’t straightforward, a myriad of characters all possible suspects, and Winspear left you on tenterhooks, kept you guessing until the last possible moment before revealing the culprit.

It reminded me very much of an Agatha Christie novel, each suspect carefully weighed up, each with their own motive, you decision made as to the culprit before all your theories are unceremoniously thrown out of the window.

Did I miss the blood and gore?Absolutely not! It was an absolute pleasure to read a crime novel that used its characters and its narrative to tell a mesmerising and fantastic story.

I would like to apologise to my library colleagues and customers for my reluctance and dismal of the wonderful Maisie Dobbs, I have been converted!

I would like to thank Allison and Busby for a copy An American Agent to read and review and to Anne Cater of Random Things Tours for inviting My Bookish Blogspot to participate in the blogtour. 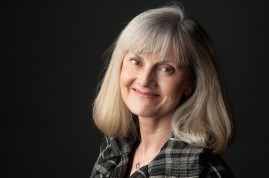 Jacqueline Winspear was born and raised in Kent and emigrated to the USA in 1990. She has written extensively for journals, newspapers and magazines, and has worked in book publishing on both sides of the Atlantic. The Maisie Dobbs series of crime novels is beloved by readers worldwide – always going into the New York Times top 10 on publication. Jacqueline will be available for interviews, events and written features.
More info at: jacquelinewinspear.com