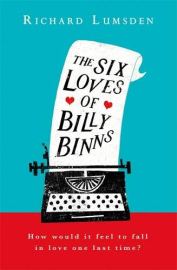 THE SIX LOVES OF BILLY BINNS is a deeply moving, bittersweet century-spanning debut set in London against the backdrop of the changing 20th century. It is reading group fiction perfect for those who loved the quirky pathos of Gail Honeyman’s ELEANOR OLIPHANT IS COMPLETELY FINE and the warmth and humour of Rachel Joyce’s THE UNLIKELY PILGRIMAGE OF HAROLD FRY.

At well over a hundred years old, Billy Binns believes he’s the oldest man in Europe and knows his days are numbered. But Billy has a final wish: he wants to remember what love feels like one last time.

As he looks back at the relationships that have coloured his life – and the events that shaped the century – he recalls a lifetime of hope and heartbreak.

This is the story of an ordinary man’s life, an enchanting novel which takes you on an epic yet intimate journey that will make you laugh, cry, and reflect on the universal turmoil of love.

I have a new love in my life, he may be over one hundred years old and live in a care home but he was one lovable rogue and his name was Billy Binns.

It was perplexing to read that I had lots of competition for his affection, in fact I had six rivals, but I didn’t mind because I got to learn the life story of this deeply flawed but wonderful character that Richard Lumsden had created.

What was truly wonderful was that Billy’s story was a complete history of the 19th Century plus a little of the 20th. His 1900’s birth date took us through the horror of the trenches of World War I and the blitz of World War 2.

We got to see it all, through the eyes of Billy and what wonderful eyes they were.  I will never forget the horror, sheer terror and absolute bravery of Billy’s experiences above and in the trenches of World War I, testament to Lumsden’s fantastic narrative that placed you right there with Billy, as you felt his fear and terror.

Yet, it wasn’t just Billy’s war experiences or indeed his passage through the century’s main historical events that drew you in, it was also loves in his life, Mary, Evie, Archie and Mrs Jackson. All were completely different and what I admired most of all was Lumsden’s  ability to match each love with the trends, fashions and most importantly the society morals and thoughts of that particular time. It was a great way to understand and learn the history and a unique way to unlock the voice of Billy Binns.

He wasn’t a goody two shoes, in fact in some ways he was quite naive, his life lacking in a strong role model, a father who took little or no notice spending most of his time in the pub and a mother unable to stand up against her husband and guide her son along the right path. His naivety and consequent bad decisions, had a dramatic effect on his life and at one point I was inwardly screaming at him to stop and think and not risk everything, a clear sign that Lumsden and well and truly got me emotionally involved with Billy.

In fact, the whole novel was a rollercoaster of emotion, at times it plunged you deep into the depths of despair before pulling you up and making you chuckle at some of Billy’s antics.

He may have been a bit of a rogue, but deep down he had a heart of gold and I was incredibly sad to leave him as I turned the final page.

I adored Billy Binns and I loved the novel, it had everything and more, love, war, sorrow, grief but above all hope.

Please read the bits about the author, the history behind the writing of the novel is absolutely fascinating

I would like to thank Tinder Press for a copy of The Six Loves of Billy Binns to read and review and to Anne Cater at Random Things Tours for inviting My Bookish Blogspot to participate in the blogtour.

I was twenty-seven in 1992 and living in Shepherd’s Bush when I first had the idea for this book. Inspired by old photographs on the walls of the library (now the Bush theatre) of trams on the Green, and an old white arch beside the central line station, I mapped out Billy’s story but became daunted by the amount of research required to detail all of the last century and turned to writing TV & radio scripts instead.

In 2000, I discovered a series of booklets published by the Shepherd’s Bush Local History Society. I phoned their secretary, Joan Blake, who invited me to their monthly meetings in the back of St Luke’s Church on the Uxbridge Road. Over the next few months I listened to stories of growing up in W12 through the 20s, 30s & 40s, and watched slide shows featuring the exhibition palaces and canals at White City. With the kind help of Joan and her friends I was finally able to get started. It took me eighteen months to research and write part one of the novel. Then, faced with more intensive bouts of historical research for parts two to five, I decided I wasn’t cut out to write novels and abandoned the idea.

By 2009, having already worked on a couple of plays for BBC Radio 4, I decided to write ‘The Six Loves Of Billy Binns’ as a play too. It still needed more research but a 45 minute radio script was less daunting than going back to the novel. In 2009 Sir Tom Courtenay gave Billy his voice, and the radio play, of which I’m very proud, still gets repeated from time to time. However, I knew I’d bottled out by not telling Billy’s story as originally intended.

In 2015 I turned fifty, and at a very different stage of life, twenty-three years after starting part one of the novel. A supportive literary agent encouraged me to get it finished. I went back to my Shepherd’s Bush Local History Society booklets and took another two years to complete a draft to send out to publishers.

It’s a story about love, disappointment, and the flaws that make us human. Billy has a tendency to re-interpret his own history, but ultimately he’s an ordinary man who lived an ordinary life, and I hope the readers might take him to heart on his journey to remember what love feels like.

Richard Lumsden has worked as an actor, writer and composer in television, film and theatre for 30 years. As an actor his films include Downhill, Sightseers, Sense & Sensibility and The Darkest Hour, as well as numerous television shows and theatre productions. THE SIX LOVES OF BILLY BINNS is his first novel.