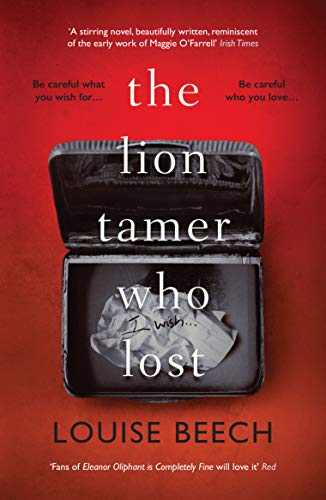 Be careful what you wish for…

Long ago, Andrew made a childhood wish, and kept it in a silver box. When it finally comes true, he wishes he hadn’t… Long ago, Ben made a promise and he had a dream: to travel to Africa to volunteer at a lion reserve. When he finally makes it, it isn’t for the reasons he imagined… Ben and Andrew keep meeting in unexpected places, and the intense relationship that develops seems to be guided by fate. Or is it? What if the very thing that draws them together is tainted by past secrets that threaten everything? A dark, consuming drama that shifts from Zimbabwe to England, and then back into the past, The Lion Tamer Who Lost is also a devastatingly beautiful love story, with a tragic heart…

I’m not sure how this review will go, as it is hard to put into words how this book made me feel, and most importantly how brilliantly it is written.

Louise Beech has written a novel that literally had me sobbing in my local Cafe Nero’s. Her characters were just the most intense, flawed yet likeable people you will ever read about.

First of all there is Ben, young, but troubled with an alcoholic for a father, a dead mother who he misses immensely,  and a brother in Afghanistan.  When I first met Ben he was in a lion sanctuary in Zimbabwe and straight away I knew that there was something wrong, something he was running away from. Beech doesn’t let on straight away, instead setting the scene, describing vividly the beautiful African landscape, Ben’s fellow volunteers and the majesty of the lions.

I loved Beech’s narrative, as she portrayed Ben’s relationship with his rescued lion cub, Lucy, and was so pleased it wasn’t the cute fluffy version we so often read. Instead Beech described the almost love, hate relationship they had, the respect each had to gain from the other and most importantly learning how to let go.

In some ways it mirrored Ben’s relationship with Andrew who we slowly meet as Ben thinks back to the reason he ran away. Andrew is somewhat older, alone and longing for the family he never had, his wishes kept in a box, in the  hope that one day they would come true. He had aspirations to be a children’s author, small extracts littering the start of each chapter, each sentence weighed heavy with poignancy, reflecting the various moments and events in the novel.

Andrew had the experience of age on his side, but that still did not stop him falling in love with Ben, relying on him as his health took a nosedive. But as we all know the course of true love never runs smooth, and this is where Beech excelled.

The sheer emotion, and poignancy that poured from the pages was mesmerising and I felt myself wholly immersed in these two characters, drawn into their trauma, their feelings, their despair. I can honestly say it is very rare for a novel to affect me so much and I can only attest that to the sheer quality of Beech’s writing.

It was the fragility of Ben and Andrew that Beech managed, so cleverly to convey, and in particular Ben’s pestilence, almost childlike behaviour when things didn’t go his way or he didn’t get what he wanted. You could see him grow up as the pages turned, his acceptance of responsibility and of the past slowly maturing him emotionally.

It would be easy for Andrew to take second place to Ben in the novel, but Beech managed to maintain a balance, equally writing of Andrew’s struggles and his own acceptance of the past and the present, of his maturity and life experience, trying to do what he believed to be the right thing for Ben and himself.

If you are reading this novel and expecting hearts, flowers, and fluffy African lions then this is not the book for you. This is a novel that will, quite literally take your breath away with its intensity, its emotion and ability to burrow deep within your heart.  I defy anyone not  to be affected by what they read and I want to shout out to everyone to buy or borrow The Lion Tamer Who Lost because it is simply stunning.

Louise Beech is an exceptional literary talent, whose debut novel How To Be Brave was a Guardian Reader’s Choice in 2015. The sequel, The Mountain in My Shoe was shortlisted for the Not the Booker Prize. Her third book, Maria in the Moon was widely reviewed and critically acclaimed. Her short fiction has won the Glass Woman Prize, the Eric Hoffer Award for Prose, and the Aesthetica Creative competition, as well as shortlisting for the Bridport Prize twice. Louise is currently writing her next book. She lives with her husband and children on the outskirts of Hull – the UK’s 2017 City of Culture – and loves her job as Front of House Usher at Hull Truck Theatre, where her first play was performed in 2012.