HE’S GONE is the first in a gripping police procedural series with a transgender detective – a compelling, fast-paced, and assured crime fiction series with a contemporary and relevant heroine.

On her first day returning to work as Robyn rather than Robin, DI Bailley is thrust into the media spotlight when she must solve a missing child case whilst dealing with the reactions of her colleagues, the local community, and her.

Its always interesting to read new authors and especially those with a slightly different perspective and I’m thrilled to be a sharing an extract from Alex Clare’s He’s Gone.

Robyn scurried through the door into the dim lobby of the police station. The desk sergeant was playing with his mobile, top two shirt buttons undone, no tie. Robyn opened her mouth then decided she couldn’t face a confrontation over the dress-code at this precise moment.
‘Good morning.’ The voice was too squeaky because she hadn’t practised enough. Talking to herself at home had made her feel crazy. ‘Morning, sir.’ The usual response. Robyn kept moving. She was determined not to stop, not to let others’ reactions bother her. She knew he didn’t mean anything bad, reasoning that if it had taken her over forty years to
have the confidence to declare herself a woman, she had to allow everyone else time. She concentrated on walking because the tape between her legs was pushing them apart making her feel like a gunslinger entering a saloon. The new shoes, bought over the internet in a size nine-and-a-half, claimed to be for women but didn’t look much different to her old ones. She was grateful she hadn’t risked heels.

Along the corridor, the notices on the staff board had new ones pinned over them. The same bulb was out near the lift where a knot of people waited, a woman in a black suit standing apart, tapping into a BlackBerry. Chatter about a local girl’s chances on Superstar Seeker stopped, leaving a sudden absence of conversation. The thought
of standing and waiting in silence wasn’t appealing so she kept on moving towards the stairs. Robyn was past the group when she heard the HR Business Partner.
‘Ah, DI Bailley, welcome back. Good break?’
Robyn opened her mouth but the woman hadn’t finished. ‘Relaxing, I hope? We’re all glad to have you back.’ One civilian worker was gazing at Robyn and another, with equal intensity, at the floor. Robyn stopped, wondering what to do with her hands as the speech went on. ‘It’s always good to take holiday early in the summer I think, don’t you?’ The woman flicked her highlighted hair behind one ear. ‘You get a good break and things aren’t so crowded. I’m going away soon myself …’
The lift arrived and people shuffled forward. The tall woman answered an unspoken question by holding the doors open with her briefcase.
‘Well, good to catch up, DI Bailley. If you need anything, do let me know.’
The doors closed. There had been lots of meetings with HR in the last few months and presumably there would have to be more. Robyn made a note to keep arranging them for late in the day when she could have a stiff drink afterwards. As she trudged up the stairs to the second floor, Robyn wondered what conversations were now taking place. The tape around her groin rubbed every time she raised her foot but being back in the bland,
familiar building was soothing. She took a deep breath on the last landing, clinging to the belief that everything would be fine. The team’s morale was strong, she’d spent two years building it up, which was why she hadn’t taken up the superintendent’s offer of a transfer to a new station. But it didn’t say much for her opinion of them, when she
hadn’t even told them what she was going to do face-to-face. Now it was actually happening, there seemed to be lots of things she could have handled better. Robyn stood outside the CID office, gripping the handle, still hesitating. She’d come this far …
In the office, Detective Constable Ravi Sharma was sorting through piles of statements. Talking to his back seemed cowardly so Robyn dropped her handbag onto a desk with a thump. Ravi spun round, eyes widening with shock, narrowing with scrutiny, before finally crinkling with welcome. ‘You made me jump. Ma’am. Good break?’ Robyn paused before replying. Ravi was blinking a lot. ‘Yes thanks, Ravi. Good to be back. How are you?’ ‘Fine. Thanks. Ma’am.’ Robyn sat down, wondering which short person had been sitting in her chair and reached under the seat to adjust it. ‘Now which of these does the height – ah.’ When she sat back, Ravi was still standing, wearing the same fixed smile, making her wonder when he’d last taken a breath. ‘Janice has been keeping me up to date with texts. She said everything had been quiet, apart from the new
burglary.’ ‘Yes, ma’am, same as the last five, another pensioner but there’s a witness this time, a neighbour who was able to give a description. Lorraine’s following it up.’ Ravi’s chest swelled as he gulped air. In the pause, a buzz of conversation in the corridor rose then fell. ‘And you got the result in the hit and run – good work.’ ‘Thank you. Ma’am. The bloke pleading guilty meant they didn’t need what I’d put together but at least he went down.’ Ravi’s rigid grin had returned. Robyn smiled back, willing him to relax. ‘Your work meant he’d no choice but to change his plea. Avoiding a trial is good news.’ Ravi’s
hands unclenched. ‘A confession is best because getting someone to make a clean breast……

Ravi twitched, sending half the statements sliding to the floor. As he scrambled to retrieve them, Robyn switched on her computer, reflecting if this was the reaction from Ravi, aged twenty-seven with a sociology degree, things were going to be at the lower end of her expectations. There was a shriek of laughter as Detective Constable Lorraine
Mount barged in, holding the door for Detective Sergeant Graham Catt, both laden with bags from the canteen. After the laugh died, no one said anything for a moment. ‘Right, let’s get started on these while they’re hot. Here you go, Raver.’ Graham handed Ravi a fried-egg sandwich, the yolk already seeping through the napkin. ‘And there’s your hot chocolate – careful you don’t fall asleep.’ There was a pantomime between him and
Lorraine as they worked out which of the bacon rolls had brown sauce. ‘There’s yours, Guv.’ He reached into another bag. ‘And tea as well. One sugar, not much milk.’ Robyn reached for the cup, conscious of the tension in her shoulders. As her number two, of all the team, she’d worried most about how Graham would react and now he’d offered a neat way out of one problem. She’d always hated ‘Guv’ because it was how the previous
DI had been addressed but anything was better than ‘ma’am’. ‘Thanks, Graham. Morning, Lorraine. It’s good to be back.’ And for the first time she believed it might be. The voice was OK – not too deep or high. ‘Anyone seen Janice this morning?’ ‘Holiday today, Guv – her birthday.’ Ravi spoke through a mouthful of sandwich. She’d forgotten. Unlike Janice, who always remembered everyone else’s special occasions. ‘Oh yes. Have we got her a card?’ Three blank faces. ‘OK, Ravi, pop out and get one today and we can all sign it. And
some chocolates or something too.’ The team settled around Robyn’s desk as, for once, it was free of clutter. ‘Right, let’s get started. Lorraine, where are we with the burglaries?’

Lorraine stopped in mid-chew, nose powdered in flour, whiteagainst her dark skin. Normality was restored, until Robyn noticed Ravi staring at the lipstick mark on her cup.
The door opened. As it swung closed, the reek of Superintendent Fell’s sweat moved with the air. His presence in the incident room was unusual and there was an immediate hush, apart from furtive flicks as napkins removed grease. ‘Welcome back, Bailley.’ Fell’s gaze was fixed somewhere above Robyn’s face. ‘We have a missing child at Whitecourt Shopping Centre. Uniform are there but the local news has already picked up the story so I need a senior officer to take charge.’ He glanced down at a heavy watch. ‘Give updates to Tracey as I have meetings all morning.’ The door closed, leaving the room with a penetrating reminder of Fell’s presence. It focused the mind. Robyn’s worries over what she was wearing seemed less important now she was needed. ‘Right.’ Robyn stood up. ‘Graham and I will take this. Ravi, get the kid’s name and run background checks with Social Services. Let’s hope this is a false alarm but it never hurts to be prepared, especially if the press are already on it. Lorraine, keep working on the burglary.’ If there were stares in the corridors on the way out, she didn’t notice them. Her mind was checking off things to be done. As they walked outside, Graham tutted and pointed to where DC Janice Warrener was bending to lock a small van. Janice met them at the bottom of the steps, her blouse buttoned into the wrong holes. ‘Morning, Robyn. When I heard the news on the radio about the missing boy I thought I’d better come in. Then my car wouldn’t start and I had to take Martin’s …’ Even though she appeared flustered, Robyn could feel a gentle gaze taking in details of her new appearance. She touched her own buttons. Janice looked puzzled before she glanced down and blushed. Hoping she hadn’t upset her, Robyn smiled. ‘Thanks for thinking of us, Janice, and thanks for the updates while I was away. And Happy Birthday. Let’s hope the lad isn’t far away and you can be home before long. I’ve set Ravi getting background: can you let him know where
everything is?’ Walking between cars, Robyn had a moment of panic when she touched her thigh: her car key was not in the pocket. Then the realisation. Nothing was in the trouser pocket because the woman’s suit she was wearing didn’t have any pockets. Everything she needed, keys, wallet, phone, was all in the black handbag swinging from her shoulder. Graham pulled out his own keys. ‘I’m driving, mind. Bloody women drivers.’ 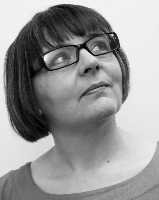 After nearly twenty years of being a committed corporate person, Alex Clare was made redundant. She had always enjoyed writing, studying fiction part-time through the Open University and managing to complete a novel in her commuting time, though no one had ever read it. Now, with lots more time on her hands, there was the opportunity to take writing more seriously. She began to enter competitions and joined a writing group, which encouraged her to try out new genres and styles.

After a period focusing on short stories, she wanted to try another novel. Inspiration came from watching Parliament debate the Equal Marriage Act in 2013. Astounded by the intensity of feeling generated, she created a fictional world to explore some of the issues and attitudes. Now working again she is working on her second novel, in her usual place, on a London commuter train.

If you enjoyed the extract you can read reviews of He’s Gone by following the blogtour.