Dunedin’s favourite young police officer Sam Shephard is drawn into a perplexing investigation when a series of shipping containers wash up on a sleepy New Zealand beach, and a spate of unexplained deaths ensues…

Chaos reigns in the sleepy village of Aramoana on the New Zealand coast, when a series of shipping containers wash up on the beach and looting begins.

Detective Constable Sam Shephard experiences the desperation of the scavengers first-hand, and ends up in an ambulance, nursing her wounds and puzzling over an assault that left her assailant for dead.

What appears to be a clear-cut case of a cargo ship running aground soon takes a more sinister turn when a skull is found in the sand, and the body of a diver is pulled from the sea … a diver who didn’t die of drowning…

As first officer at the scene, Sam is handed the case, much to the displeasure of her superiors, and she must put together an increasingly confusing series of clues to get to the bottom of a mystery that may still have more victims…

A third outing for Detective Shephard, still fighting with her boss, still trying to prove her place on the team. One thing you were guaranteed was a woman who was not going to be meek and mild and accept her lot. Oh no, Sam Shephard was going to prove her worth even if that meant she placed herself in danger.

It often seems so sad that even today, in a male dominated environment a woman still had to work twice as hard, yet Symon didn’t make us feel sorry for Sam, or labour the point. She gave Sam a steely determined nature, someone who just got on with it. We got to see more of the off duty Sam, the one who wrestled with commitment, who grappled with guilt and self doubt, her relationship with fellow officer Paul, at the centre, the will they or won’t they stay together a running theme throughout.

What about the plot, the crux of the novel? As ever it was fast moving, ever changing and gripping. A grounded ship, marooned containers that contained a multitude of treasure that spelled danger for those unlucky enough to have looted the goods.

A double strand to the story, that gave it gave it that extra sprinkle of intrigue, as us the reader grappled with the numerous twists and turns.

Characters were brilliantly flawed and unreliable, as Symon threw in a few delicious red herrings, and pushed Sam ever closer to the illicit and blurred lines of unprofessionalism in her pursuit of the culprits.

I couldn’t read fast enough as Sam hurtled toward danger, as tragedy struck and finally the lies lay in tatters and the truth emerged.

It wasn’t so much of an ending as a ‘to be continued’, questions left lingering and the prospect of a potential clash of the personal and the professional surely await in the next instalment

Please do not make us wait too long Vanda Symon!

I would like to thank Orenda Books for a copy of Containment to read and review and to Anne Cater of Random Things Tours for inviting My Bookish Blogspot to participate in the blogtour. 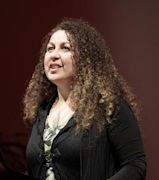 Vanda Symon is a crime writer, TV presenter and radio host from Dunedin, New Zealand, and the chair of the Otago Southland branch of the New Zealand Society of Authors. The Sam Shephard series has climbed to number one on the New Zealand bestseller list, and also been shortlisted for the Ngaio Marsh Award for best crime novel. She currently lives in Dunedin, with her husband and two sons.