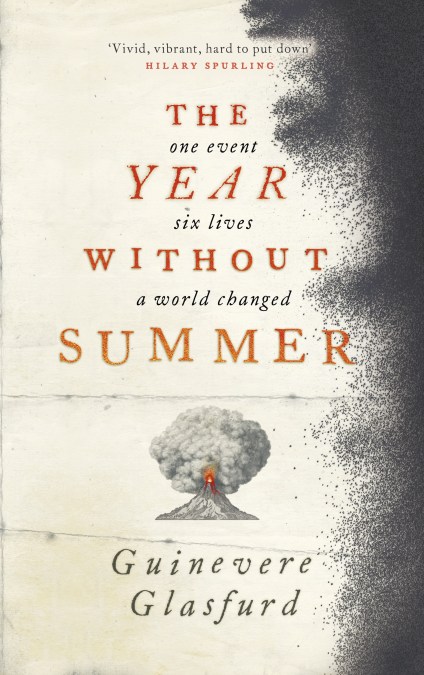 1815, Sumbawa Island, Indonesia
Mount Tambora explodes in a cataclysmic eruption, killing thousands. Sent to investigate, ship surgeon Henry Hogg can barely believe his eyes. Once a paradise, the island is now solid ash, the surrounding sea turned to stone. But worse is yet to come: as the ash cloud rises and covers the sun, the seasons will fail.

1816
In Switzerland, Mary Shelley finds dark inspiration. Confined inside by the unseasonable weather, thousands of famine refugees stream past her door. In Vermont, preacher Charles Whitlock begs his followers to keep faith as drought dries their wells and their livestock starve.

In Suffolk, the ambitious and lovesick painter John Constable struggles to reconcile the idyllic England he paints with the misery that surrounds him. In the Fens, farm labourer Sarah Hobbs has had enough of going hungry while the farmers flaunt their wealth. And Hope Peter, returned from the Napoleonic wars, finds his family home demolished and a fence gone up in its place. He flees to London, where he falls in with a group of revolutionaries who speak of a better life, whatever the cost. As desperation sets in, Britain becomes beset by riots – rebellion is in the air.

The Year Without Summer is the story of the books written, the art made; of the journeys taken, of the love longed for and the lives lost during that fateful year. Six separate lives, connected only by an event many thousands of miles away. Few had heard of Tambora – but none could escape its effects.

I loved this novel for its intriguing mix of fictional and true historical detail. The eruption of Mount Tambora in 1815 was the catalyst for a chain of events in 1816 as its effects wrecked havoc on the world’s climate, summer a distant memory, snow, wind, rain the dominate features. In the aftermath of the 1816 eruption a British ships doctor was forced to face the trauma of an island devasted by the volcano, its people either dead or severely burnt. You could sense his helplessness, his changing attitude to his own life and his desolation at having to leave them. In America Charles Whitlock battled drought, his faith and tragedy.  In England John Constable sought acceptance for his landscape paintings and the marriage of the love of his life. Hope Peter returned from the Napoleonic Wars found himself in the midst of rebellion as the poor became poorer and the richer ever richer. In Switzerland, Mary Shelly was challenged to write a novel that would become world famous.

It sounds complicated with multiple timelines but Glasfurd’s handling of the many stands was seamless. She gave you a real sense of the themes of the time, of the changing landscape of rural England, as machinery replaced people, the landed gentries seemingly ignorant attitude to their workers and the grinding poverty in which they lived.

The weather played its part and added to the darkness, the persistent wind and rain in England, depressive and all compassing, the heat of the sun in rural America, unrelenting as it forced the characters to question their motives, their whole reason for being. I loved that it pushed them out of their comfort zones, their actions often based on obsession or desperation especially in the case of Charles Whitlock.

The characters were all so varied, their suffering and oppression relevant to their class status, which Glasfurd used brilliantly to show the differing effects of change and attitudes.

It was a novel full of wonderful imagery, the narrative insightful, and compelling, the historical detail fascinating and perfectly blended with the fictional. A novel with a different slant, a wonderful uniqueness that made for engrossing reading.

I would like to thank Two Road Books for a copy of a Year Without Summer and to Anne Cater of Random Things Tours for inviting My Bookish Blogspot to participate in the blogtour.

Guinevere Glasfurd was born in Lancaster and lives near Cambridge with her husband and daughter. Her debut novel, The Words in My Hand, was shortlisted for the 2016 Costa First Novel Award and Authors’ Club Best First Novel Award and was longlisted in France for the Prix du Roman FNAC. The Year Without Summer was written with support from the MacDowell Colony Foundation. Awarded grants from the Arts Council England and the British Council for her novels, her writing has also appeared in the Scotsman, Mslexia and The National Galleries of Scotland. She is currently working on her third novel, a story of the Enlightenment, set in eighteenth-century England and France.