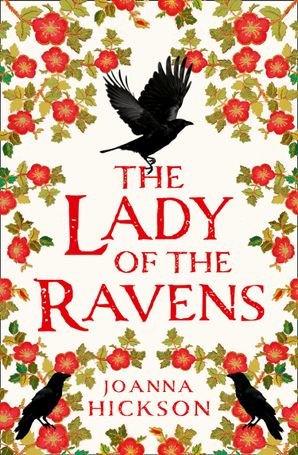 Two women, two very different destinies, drawn together in the shadow of the Tower of London:

Elizabeth of York, her life already tainted by dishonour and tragedy, now queen to the first Tudor king, Henry the VII.

Joan Vaux, servant of the court, straining against marriage and motherhood and privy to the deepest and darkest secrets of her queen. Like the ravens, Joan must use her eyes and her senses, as conspiracy whispers through the dark corridors of the Tower.

Through Joan’s eyes, The Lady of the Ravens inhabits the squalid streets of Tudor London, the imposing walls of its most fearsome fortress and the glamorous court of a kingdom in crisis.

Two women navigated the court of Henry VII, Elizabeth his young queen, Joan part of her entourage. It was a court Hickson vividly captured in her wonderfully written novel The Lady Of The Ravens.

I knew little of the reign of Henry VII but Hickson gave us all the colour and vibrancy of the feasts, the weddings but more importantly the intrigue and festering plots that surrounded it. Hickson portrayed a king who desperately tried to realign his kingdom after the war between the York’s and the Lancastrians, and I for one was fascinated.

What fascinated even more was the the life of women in the royal circle, Joan young, determined to serve her Queen, who rebuked marriage and children. She was a woman with intelligence who found relaxation in books rather than tapestry or music, who roamed the grounds of the Tower of London fascinated by the Ravens that lived there. Indeed the Ravens were a common theme throughout, as they acted as her talisman, her protection against the dangers that lurked. She was a woman who matured within the pages who opened her eyes to love, but whose loyalty to those around her remained steadfast, and resolute.

Elizabeth, the Queen, another strong woman, again loyal to those around her, stalwart to her King. You wondered how she dealt with the pressure, the need to produce a healthy heir, to withstand multiple pregnancies that could have ended in her own death.

It was the sacrifices these women made that stood out, their children left to the care of nannies and governesses as they carried out their duties.

Hickson’s narrative was full of the wonderful imagery of the royal palaces, their journeys on barges down the Thames and the majestic Tower Of London. You were instantly transported to 15th Century London, the acrid smells of the streets, and the myriad of people that frequented them.

The historical aspects were well researched and informative, the air filled with imminent danger, those deemed as traitors faced with the threat of death by beheading. It was definitely not a comfortable life for many, but that added to the underlying and simmering drama created by Hickson. There were hints at trying and perilous times ahead for Joan and her Queen and I cannot wait for the next instalment.

I would like to thank Harper Collins for a copy of The Lady Of The Ravens by Joanna Hickson to read and review and to Anne Cater of Random Things Tours for inviting My Bookish Blogspot to participate in the blogtour.

Joanna Hickson was born in England but spent her early childhood in Australia, returning at thirteen to visit her first castle and fall in love with medieval history. During a twenty-five year career in the BBC, presenting and producing News and Arts programmes for TV and Radio, Joanna also published a children’s historical novel Rebellion at Orford Castle but now she is writing adult fiction full-time, indulging her passion for bringing the medieval past and its characters to life.

First inspired by Shakespeare’s history plays she began researching Catherine de Valois, Henry V’s ‘Fair Kate’, who is the subject of The Agincourt Bride and The Tudor Bride and now her interest has progressed into the Wars of the Roses which form the background to Red Rose White Rose and the eventful life of Cicely Neville, Duchess of York and will also feature in her next two novels. As a result Joanna warns that she spends much of her life in the fifteenth century and even her Wiltshire farmhouse home dates back to that period.

She is married and has an extensive family, some of which boomerang her back to Australia for visits! Twitter @joannahickson Facebook page: Joanna Hickson