When the body of a pregnant fifteen-year-old is discovered in a churchyard on Christmas morning, the community is shocked, but unsurprised. For she lived in The Home, the residence of three young girls, whose violent and disturbing pasts have seen them cloistered away…

As a police investigation gets underway, the lives of Hope, Lara and Annie are examined, and the staff who work at the home are interviewed, leading to shocking and distressing revelations … and clear evidence that someone is seeking revenge.

A gritty, dark and harrowing psychological thriller, The Home is also a heartbreaking drama and a piercing look at the underbelly of society, where children learn what they live … if they are allowed to live at all…

Home is where the heart is or so they say. It’s where we go to feel safe and secure, but what if it wasn’t our happy place, what if it was a nightmare we longed to escape.

For Annie, Hope, and Lara home was that nightmare, one they escaped only to be plonked in a looked after home in the middle of the Lake District. From the outset Stovell left us in no doubt that The Home wasn’t going to be full of cosy social workers out to ‘save’ three vulnerable girls. Instead in the voices of each of the three girls and head of the home Helen, she gave us characters damaged by life, and by those who were supposed to love and protect us.

Annie, was the only one who I felt had a future, one who sought refuge in education, had a greater intelligence, had more control. I loved her relationship with Hope, their shared troubles that led to love, one that Hope saw as their future, but saw Annie unwilling to compromise, unable to love at any cost.

And what of Hope, mature in some many ways, used and abused by the man she thought was protecting her, her mother, drugged up, incapable of functioning as a responsible adult. Your heart went out to Hope, her vulnerability, her clouded narrow vision of what love and family were, in the end her undoing.

Lara seemed the odd one out and I did wonder what her role would be. The silent girl, the one who watched, listened, who kept the secrets, who hovered in the background, ever present. She was Hope’s kindred spirit someone who wouldn’t answer back or question, someone she could save.

Stovell, flipped seamlessly from past to present, as she revealed the girl’s backgrounds. You could see how their thoughts, decisions and reasoning had been shaped by their trauma, the irresponsible actions of adults, their own adulthood and future scarred from the very beginning.

You questioned how they slipped through the net, the ineffectiveness of authorities put there to prevent such tragedies.

The bleakness of the Lakeland Fells added to the gloom that hung over them. The ruggedness of the landscape seemed somehow to match the ups and downs of their relationships, and the events that slowly engulfed them. They sought comfort in each other but were alone, lost in their own troubles, their own need to survive or to give in, to leave it all behind, to seek peaceful oblivion.

You would have thought their story would have been sufficient to fill the novel, but Stovell went one step further and gave us a crime novel too. How did a young pregnant fifteen year old end up murdered? Who was responsible and why?

The unravelling made for compulsive reading, the culprit already earmarked, the reader lulled into a false sense of security as they waited for the big reveal. You got to the last few pages and suddenly Stovell threw in the curve ball, your theories blown out the window, yet it left you feeling a huge sense of satisfaction that maybe things had worked out for the best. Why? Well you will just have to read The Home to discover why.

You will not be disappointed.

I would like to thank Karen at Orenda for a copy of The Hone to read and review and to Anne Cater of Random Things Tours for inviting MyBookish Blogspot to participate in the blogtour.

Sarah Stovell was born in 1977 and spent most of her life in the Home Counties before a season working in a remote North Yorkshire youth hostel made her realise she was a northerner at heart. She now lives in Northumberland with her partner and two children and is a lecturer in Creative Writing at Lincoln University. Her debut psychological thriller, Exquisite, was called ‘the book of the summer’ by Sunday Times. 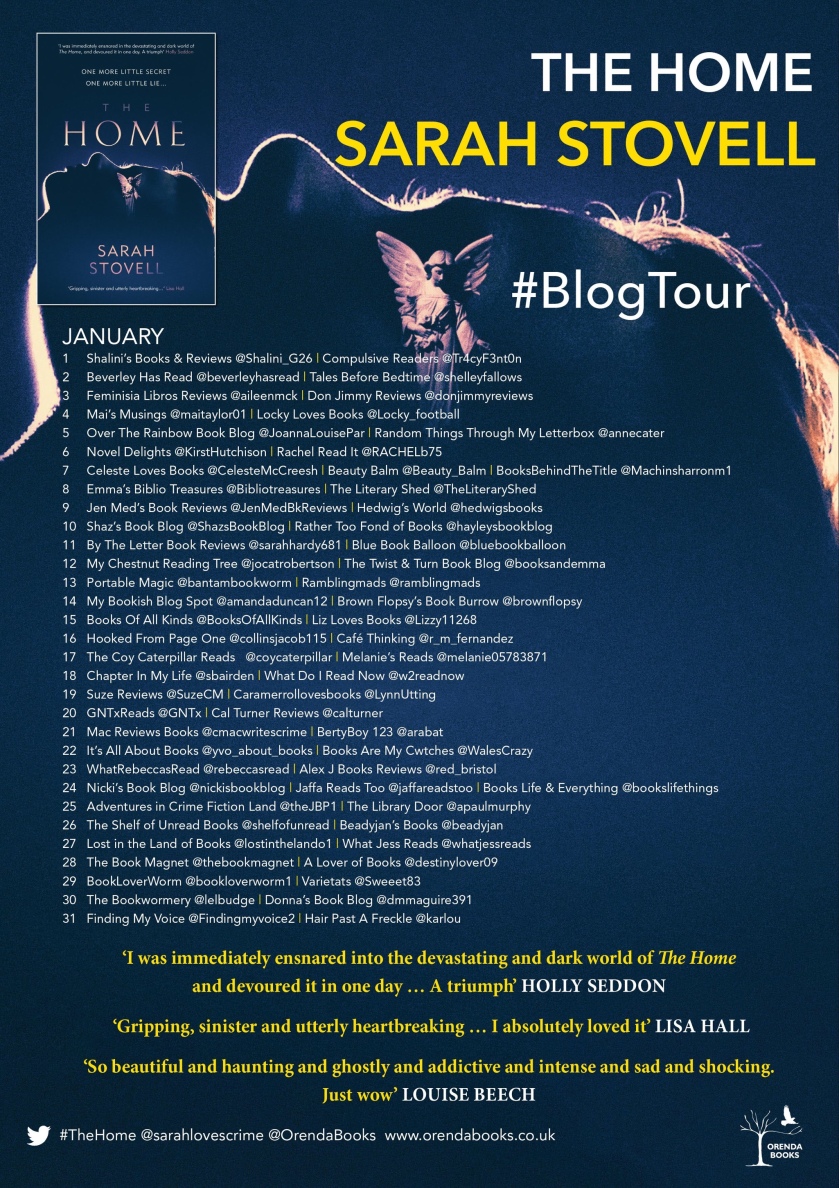