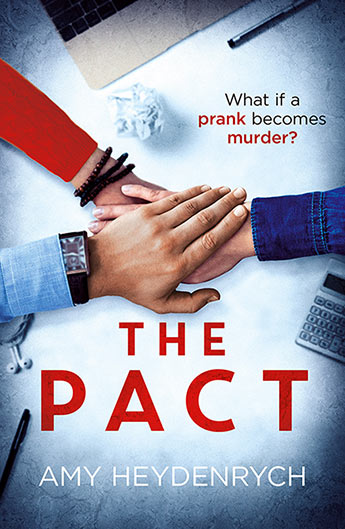 When your dream job turns into a nightmare, who can you turn to? A gripping and chilling suspense novel about the deadly intentions of office life, for fans of The Rumour and Michelle Frances’ The Temp.

What if a prank leads to murder?

When Freya arrives at her dream job with the city’s hottest start-up, she can’t wait to begin a new and exciting life, including dating her new colleague Jay.

However, Nicole, Jay’s ex and fellow employee, seems intent on making her life a misery. After a big deadline, where Nicole continually picks on her, Freya snaps and tells Jay about the bullying and together they concoct a revenge prank.

The next morning, Nicole is found dead in her apartment…

Is this just a prank gone wrong? Or does Freya know someone who is capable of murder – and could she be next?

My Review
You get the perfect job, the one you have worked hard, against all the odds, to have. The boss is super cool, and thinks your the best, but was it all too good to be true.
For Freya, you felt she was always waiting for the bubble to burst, that yes it was too good to be true, but until proven otherwise she intended to lap up every single thing. And that is exactly what she did, including dating the perfect boyfriend.
Heydenrych gave you a great sense of who exactly Freya was. A young woman who had succeeded despite being abandoned as a baby, who fought her hardest to get where she was. She wasn’t ruthless, as so many authors like to portray their characters, she was sincere, perhaps a little naive. Would you ignore the bullying, the inappropriate closeness of your boss to keep your dream job, to prevent the world you’d worked so hard for from tumbling down? It was an interesting question that Heydenrych used brilliantly to shape her novel.
The murder of Nicole, the bully, set off a chain of events that saw the introduction of Isla, journalist, victim of an incident that affected her own life, that made her all the more determined to find justice for Nicole.
Like Freya, you felt she too had something to prove, but instead of towing the line Isla fought, fought against sexual harassment in the work place, on social media.
The two differing angles worked so well together, as Heydrenych used alternating chapters in the voices of each woman. She gave us their background stories which neatly contextualised their current circumstances. You felt it was a healing process for both women, a way of finding their place in the world they found themselves in.
If sexual harassment and the empowerment of women was at the heart of the novel, Heydrenych didn’t forget it was also a crime novel, the solving of a murder the catalyst for something so much deeper and profound complete with some wonderful twist and turns.
She certainly kept the reader on tenterhooks, as the narrative swayed in the direction of one potential murderer before an about turn and casting the spotlight on a other.
It definitely wasn’t the ending I was expecting which is always the sign that the author has done a fantastic job and written a cracking novel!
I would like to thank Zaffre for a copy of The Pact to read and review and to Tracy Fenton of Compulsive Readers for inviting My Bookish Blogspot to participate in the blogtour.

Amy Heydenrych is a writer and book blogger based in South Africa. She has been shortlisted twice for the acclaimed Miles Morland African Writing Scholarship. Her short stories and poems have published in multiple anthologies including Brittle Paper, The Kalahari Review and the Short Sharp Stories anthologies. When she is not writing her own fiction, she ghost-writes books and columns for global tech and financial companies.