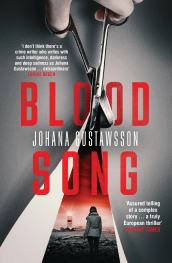 Spain, 1938
The country is wracked by civil war, and as Valencia falls to Franco’s brutal dictatorship, Republican Teresa witnesses the murders of her family. Captured and sent to the notorious Las Ventas women’s prison, Teresa gives birth to a daughter who is forcibly taken from her.

Falkenberg, Sweden, 2016  A wealthy family is found savagely murdered in their luxurious home. Discovering that her parents have been slaughtered, Aliénor Lindbergh, a new recruit to the UK’s Scotland Yard, rushes back to Sweden and finds her hometown rocked by the massacre.

Do you like intelligent, strong, gritty crime that’s not afraid to push the boundaries, to mix the historical with the present? If thats you then you need look no further than Jo Gustawsson’s Blood Song, a novel that didn’t flinch from stark cruelties, was tinged with sadness and sprinkled with hope.

The seemingly uncompromising Emily Roy and crime author Alexis Castells were once again at the forefront of a human tragedy, of a family brutally murdered. Their investigation led them to discover the unsavoury truth behind medically assisted reproduction and the injustices of Franco’s reign of fascism in Spain.

Gustawsson handled the dual timeline with effortless ease, as the once tenuous links between past and present, slowly became stronger. Her portrayal of the Spanish orphanages was unflinchingly grim and horrifying, and left you wondering how those that survived managed to move on and create a life of normality, or were they?

You were constantly reassessing characters. Were they guilty or innocent, what part did they have to play in the gruesome murders, if any? Gustawsson’s plot twisted and turned, as her ingenuity and intelligent narrative dragged you kicking and screaming into an unfolding nightmare. Gustawsson never let us forget the human cost of brutal dictatorships, of those who preyed on the young and vulnerable, of those who sought revenge and retribution.

Yet, for all it’s starkness there was a gentler side, a side that had compassion and forgiveness and most of all hope. It was a hope that what ever life threw at us there was always someone to help and a way to push through the grimness to a brighter future.

Blood Song was uncompromising and unflinching but, at its heart the storytelling was captivating, compelling and superb. You didn’t want to step away from the pages, there was always that need to read just a little bit more before Gustawsson revealed all, a truth that shocked, and an ending you didn’t see coming.

My only gripe would be that the story ended, that I had to leave behind Roy and Castells and I live in hope that another instalment will follow very very soon.

I would like to thank Orenda Books for a copy of Blood Sing to read and review and to Anne Carter Of Random Things Tours for inviting My Bookish Blogspot to participate in the blogtour. 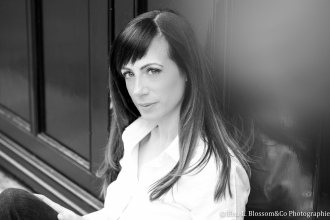 Born in Marseille, France, and with a degree in Political Science, Johana Gustawsson
has worked as a journalist for the French and Spanish press and television. Her
critically acclaimed Roy & Castells series has won the Plume d’Argent, Balai de la
découverte, Balai d’Or and Prix Marseillais du Polar awards, and is now published
in nineteen countries. A TV adaptation is currently underway in a French, Swedish
and UK co-production. Johana lives in London with her Swedish husband and
their three sons. She drew on her own experience of fertility clinics and IVF to
write Blood Song and is happy to speak and write pieces about this.