When Carrie was accused of brutally murdering her husband’s lover, she denied it. She denied it when they arrested her, when they put her in front of a jury, and when they sent her to prison.

Now she’s three years into a fifteen-year sentence, away from the daughter she loves and the life she had built. And she is still denying that she is to blame

Tess Gilroy has devoted her life to righting wrongs. Through her job for Innocence UK, a charity which takes on alleged miscarriages of justice, she works tirelessly to uncover the truth.

But when she is asked to take Carrie’s case, Tess realises that if she is to help this woman, she must risk uncovering the secrets she has struggled a lifetime to hide…

We’ve all done things we’re not proud of.

What did I like about Clear My Name? I most definitely liked the story of a miscarriage of justice, a woman wrongly imprisoned and of Tess’s pursuit of the truth as she strove to free Carrie.

It had all the tension you would want and more, as Daley kept your interest piqued and your brain well and truly engaged. It was fascinating to read of the processes needed to overturn a conviction, the opposition Tess and Avril encountered and the small and significant victories they achieved.

It was the human aspects of the novel that held my attention and most especially Tess. Outwardly brusque, abrupt, seemingly lacking in emotion, Tess appeared a closed book. It wasn’t until Daley slowly cracked open her facade that she reveal a troubled woman with her own closely guarded secrets. Unlike most crime/thriller novels Tess’s emotions didn’t spill over overtaking or drowning out the whole of the novel. Instead they remained clipped, and sharp and gave the novel an edgy feel.

Avril, the new recruit was the perfect foil, bubbly and naive with smoother, softer edges that you couldn’t help but warm to.

I couldn’t make my mind up about Carrie, unsure wether she was really a victim. There was almost something calculating about her, that didn’t necessarily make me feel sorry for her. Daley made you question her innocence, and you wondered what role her daughter Mia played. Mia herself, I found self absorbed, selfish and not someone you could take at face value.

I found the mother, daughter relationship frustrating, Carrie overprotective, as she pandered to her daughters needs. You did feel sorry for Carrie’s bad marriage, inconsiderate husband and the circumstances she found herself in but something always niggled,didn’t quite fit.

The ensuing events and actions of Daley’s characters made for compelling reading, the narrative sharp and economical giving it a brilliant dramatic, tense feel. It was a novel that definitely packed a punch and would make a great TV drama that I for one would certainly be watching.

I would like to thank Transworld for a copy of Clear My Name to read and review and to Emma Welton of Damp Pebbles Blogtours for inviting My Bookish Blogspot to participate in the blogtour. 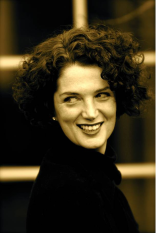 Paula Daly is the critically acclaimed author of six novels. She has been shortlisted for the CWA Gold Dagger for Crime Novel of the Year award, and her books have been developed for the new ITV television series, Deep Water, starring Anna Friel. She was born in Lancashire and lives in the Lake District with her husband, three children, and whippet Skippy. 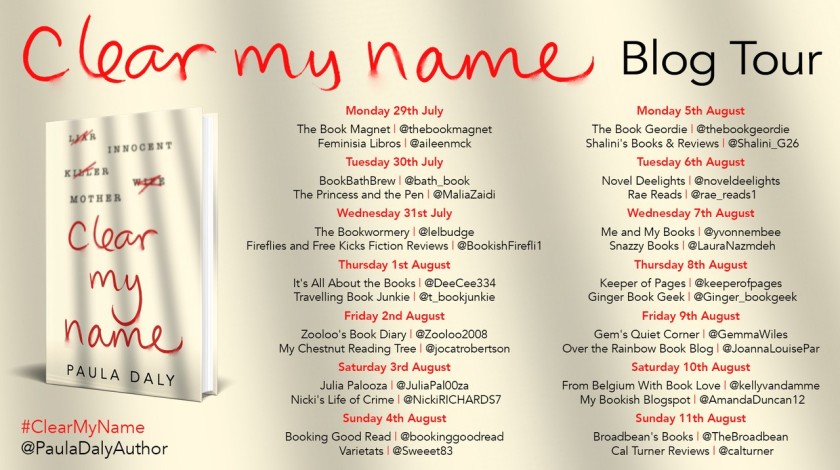