A body, briefly glimpsed at the bottom of an abandoned mineshaft, vanishes when the police investigate. Jared recovering from an almost fatal injury and addicted to
painkillers, knows he saw something terrible in that mine… but he has no evidence, and fears he’s losing his grip on reality.
A girl is attacked so savagely she can’t be identified, and dumped late at night in an isolated campground. She’s alive, but only just. Becca, tossed out of university and just let go from her dead-end job, is certain she knows who the victimis. But no one will believe her, and she can hardly even trust herself.
Kay, recently widowed and coming to terms with life on her own, suddenly finds herself forced to get involved. For years she and her husband fostered difficult children – including Becca, whom trouble follows like a stray puppy. And now Becca seems to be in the worst trouble of her life.
And then Jared and Becca meet. Becca, strong-minded and fiercely independent, is confident they can figure out what’s going on. She pulls Kay into the mix, knowing they’ll need all the help they can get….because the police don’y believe them. And more girls are vanishing.
Separately, Kay, Becca and Jared believe their lives have hit rock bottom. But drawn together under extraordinary circumstances, they’ll discover the strength to fight back… and ultimately rebuild their lives from the ruins.

Hold on tight as this novel is fast, with plot twists and turns aplenty, but it’s not just the plot that made this novel stand out, but it’s wonderful characters. They were characters for one reason or another for whom life had not been kind, everything a struggle with seemingly no way out.

I loved the feisty Becca, parentless, brought up in foster homes with an inner anger that lingered just below the surface. She was unpredictable but resourceful and it was fascinating to see her change and mature as the story unfolded.

Jared was completely different, a family he’d left behind after a traumatic event that seemed to haunt him, a free climbing accident that wracked his body with pain. I liked that Kot didn’t really reveal his full story but let us read between the lines, see the clues in the way he dealt with events and his actions.

Kay, foster Mum, a widow and lonely who tried to get through each day as best she could.

Kot cleverly linked them altogether, Kay Becca’s past foster mum, but best of all was the relationship between Jared and Becca.

They were two lost souls, both floundering in their lives yet the strange happenings somehow united them, gave them a purpose, a reason to move forward and you could see their attitudes, change and mature as you read.

The plot itself was brilliant, full of uncertainty, of briefly glimpsed bodies, of uncompromising, dangerous characters who would stop at nothing to get what they wanted.

The one thing that really stood out was Kot’s scene setting. The east coast towns of Bridlington and Whitby wonderfully described, the isolation of the surrounding area and the dark brooding weather created a brilliantly chilling atmosphere. It fitted perfectly with the darkness of the crimes, and the people.

It wasn’t until the latter parts of the novel that Kot drew the complexities of the plot together and revealed all. It certainly didn’t make for pleasant reading but then this wasn’t a comfortable cosy story. Indeed it was a brilliantly written dark and brooding thriller that I would highly recommend.

I would like to thank Simon and Schuster for a copy of Life Ruins to read and review and to Anne Cater Of Random Things Tours for inviting My Bookish Blogspot to participate in the blogtour.

Danuta Kot grew up with stories. Her Irish mother and her Polish father kept their own cultures alive with traditional tales they shared with their children.
For many years, she worked with young people in Yorkshire who were growing up in the aftermath of sudden industrial decline. She uses this background in her books to explore some of the issues that confront modern, urban society: poverty, alienation and social breakdown, using the contexts of the modern crime novel. She has previously written under the names, Danuta Reah and Carla Banks. Danuta was also a former chair of the Crime Writers’ Association.
She now works as a senior education consultant, work that involves travel to establish education and training in other parts of the world. She is a regular academic speaker at conferences and literary festivals, and has appeared on radio and television. 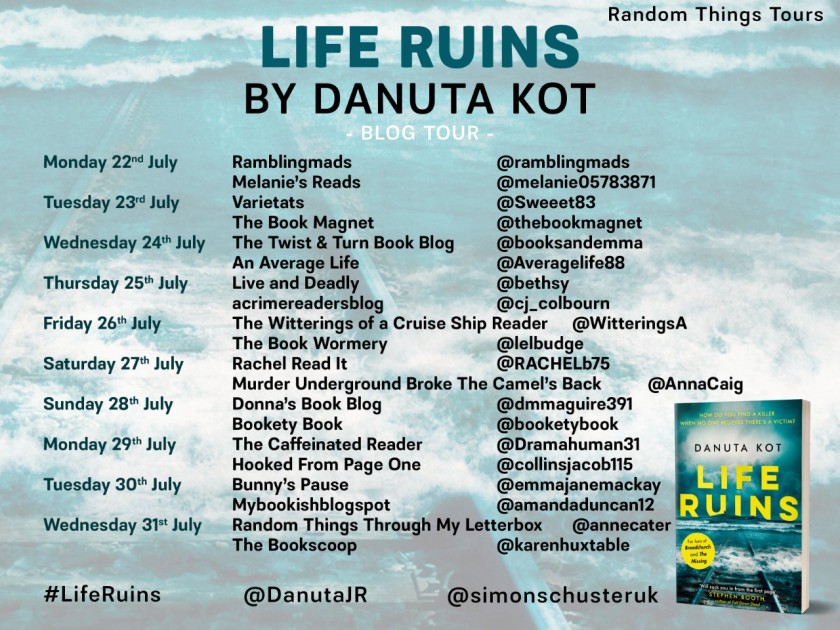