Then She Vanishes by Claire Douglas  Penguin August 8th 2019

Heather and Jess were best friends – until the night Heather’s sister vanished.

Jess has never forgiven herself for the lie she told that night. Nor has Heather.

But now Heather is accused of an awful crime.

And Jess is forced to return to the sleepy seaside town where they grew up, to ask the question she’s avoided for so long:

Ohh this novel was so good, a real page turner that had I not had guests would have read in one sitting.

I loved the whole premise of the past and the present as they collided and the ramifications for Douglas’s characters.

Jess, the journalist on the look out for a big story only to face a real moral dilemma between the professional and the personal. Her own personal demons and regrets fitted perfectly into the story, giving it a real personal feel, as she showed humanity, and tenacity in pursuit of the truth.

Margot, mother, to Flora and Heather, angry, bitter yet resolutely loyal to her family. She was fierce yet tender and I loved the relationship she rebuilt with Jess.

Told in their two distinctive voices gave Douglas the tools she needed to tell their side of the story, their perspective on the past and present. I loved the slow unraveling of Flora’s disappearance, the connections as they became ever more clearer to present day events.

The supporting cast of characters gave the novel added, and intriguing complications that left the reader wondering who to trust, who to believe. What intrigued most was the unknown voice whose thoughts were cleverly interspersed between chapters. It lifted the novel, added an extra twist, as you tried to work out who it was!

Douglas brilliantly handled the complexities of her story, the threads neatly pulled together as she gave us a thrilling, tense ending.

If you haven’t read Douglas before then please do.

I would like to thank Penguin UK for a copy of Then She Vanished to read and review and to Sriya Varadharajan for inviting My Bookish Blogspot to participate in the blogtour.

Claire Douglas has worked as a journalist for fifteen years writing features for women’s magazines and national newspapers, but she’s dreamed of being a novelist since the age of seven. She finally got her wish after winning the Marie Claire Debut Novel Award, with her first novel, The Sisters, which was followed by Local Girl Missing, Last Seen Alive and Do Not Disturb, all Sunday Times bestsellers. She lives in Bath with her husband and two children. 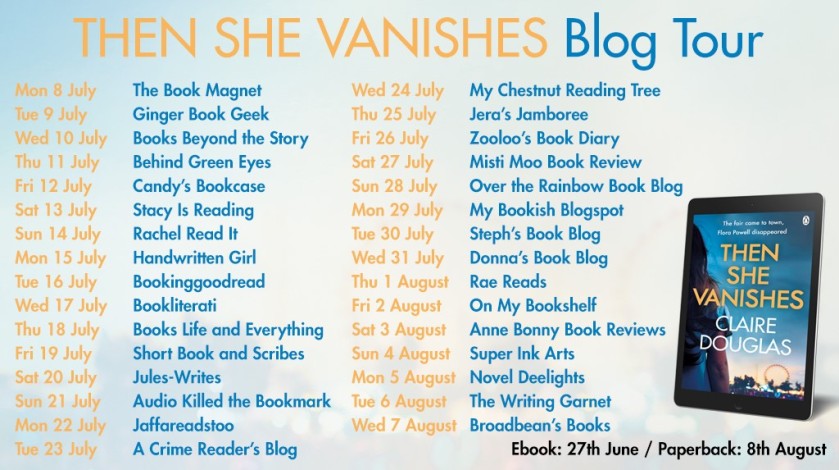