In Dublin, fourteen-year-old Jen and her father, Charlie, are struggling to cope with the death of their mother/wife. Charlie, in particular, seems to have given up on life. When Jen’s aunt, Suzanne, convinces them to go on a pilgrimage to a strange village in Yugoslavia, there is hope that some solace or healing may be brought to their broken lives. On their arrival, however, they find a village in upheaval. An influx of pilgrims have swarmed into the village, each looking for their own miracle. Then there are the local police, who aim to suppress this so-called `revolution’. Amid all this, Jen makes a friend, Iva – one of the children who claims to have seen the Virgin Mary. Told with a deep humanity and grace, Pilgrim is a story about a man who feels he has nothing to live for, and a daughter who is determined to prove him wrong. A nuanced and moving exploration of grief and faith. Unique subject matter based around the famed Medjugorje apparitions. The author already has a dedicated readership built up from her two non-fiction books on Medjugorje. This is her first fictional take on the story.

Whats you opinion on visions, pilgrimages, shrines? I have to admit to being sceptical and am not a religious person. I remember visiting Lourdes as a child and even at such a young age, I was struck by the commercialism, by the need to make money, the religious intentions almost secondary.

For some despite all this it means everything, the last ditch attempt to find a cure or indeed a miracle to heal the physical or the mental soul. For Jen it’s her only chance to bring back her Dad, Charlie, the man she loved before Mum died tragically, leaving Charlie adrift, drinking too much and unwilling to wake up and realise what was happening around him.

Told in the alternating voices of Jen, Charlie, Suzanne and Iva, Hall gave us a multi perspective view of their pilgrimage to the remote, small village in communist Yugoslavia. It allowed Hall to immerse us in their feelings, their hopes and in some cases their scathing sceptisim.

My heart belonged to Jen, Hall’s portrayal both tender and poignant, a young teenager lost in a world with no Mum, who totally immersed herself in the whole experience. You could sense her hope, see here grow up and mature in front of us, but also gain acceptance for the way things were. I loved the friendship she forged with Iva, one of the six who saw the vision, the Gospa, their mutual loss, and longings was touching and endearing.

I felt utter frustration with Jen’s father, Charlie, to the point I wanted to scream and shout, but Hall also made us feel some empathy, as she took us back into his earlier years, his grasp of the realities of life only tangible, almost like he had never grown up, never accepted or met the challenges that life threw at him.

One character that did stand out was Iva, the young village girl, one of the visionary six. The contrast between her and Jen’s life were huge, but Hall created similarities, that you knew would draw them together, and create a bond. I wondered how such a young girl dealt with the pressure of being one of the chosen, of being paraded in front of pilgrims on a daily basis, but you knew that that was how it was, that their vision was all encompassing, almost like a drug that pulled at them, never letting them go.

Having visited Yugoslavia before the Balkan War, I felt an affinity with Halls’ vivid descriptions of the military presence, the fear felt by its citizens. What I loved more than anything was Hall’s wonderful imagery, of the hazy heat, the lush and greenness of the vineyards, and the imposing mountains that towered over the village.

There were the thronging pilgrims all desperate to touch the visionary six, their fervent belief that a miracle would happen, that their prayers would be answered and that life would change. The descriptions of the Gospa were almost magical and ethereal, you could sense the joy it gave to the six, the absolute belief that what they saw was real. Hall never pushed the religious angle, never let it take over the narrative, but used her characters to give us that balance, to give us two opposing sides. It almost didn’t matter if you didn’t believe, that theories might exist to explain the Gospa, it was the impact that it had on the six, on the pilgrims, on the small village that shone through.

You could easily see how people cling to visions, to religion especially when dealing with grief, with illness and if even if they didn’t get the cure or miracle they wanted they still went away with something, with acceptance and a lightness that helped them in their everyday lives.

It was Hall’s insight and ability to get this across to her reader that I admired, her characters relatable, and ordinary that made Pilgrim a hugely impressive novel.

I would like to thank Mercia Press for a copy of Pilgrim to read and review and to Anne Cater of Random Things Tours for inviting My Bookish Blogspot to participate in the blogtour.

Louise Hall is from Malahide, Co. Dublin. She has previously published two works of non-fiction, Medjugorje: What it Means to Me and Medjugorje and Me: A Collection of Stories from Across the World. Her fiction has been published in The Irish Times and been shortlisted for numerous competitions, such as the RTÉ Guide/Penguin Short Story Award, the Colm Tóibín International Short Story Competition and the Jonathan Swift Creative Writing Awards. Pilgrim is her debut novel. 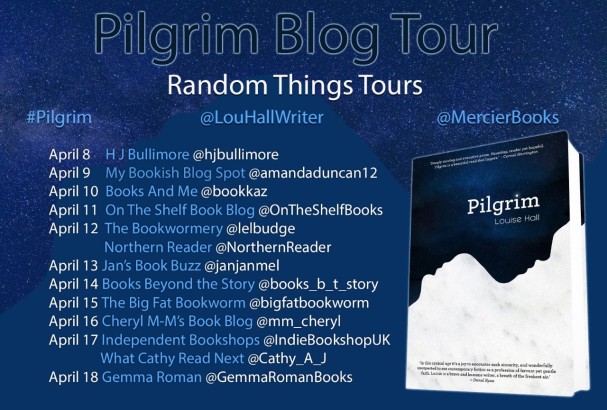