To save her child, she will trust a stranger. To protect a secret, she must risk her life…

Fleetwood Shuttleworth is 17 years old, married, and pregnant for the fourth time. But as the mistress at Gawthorpe Hall, she still has no living child, and her husband Richard is anxious for an heir. When Fleetwood finds a letter she isn’t supposed to read from the doctor who delivered her third stillbirth, she is dealt the crushing blow that she will not survive another pregnancy.

Then she crosses paths by chance with Alice Gray, a young midwife. Alice promises to help her give birth to a healthy baby, and to prove the physician wrong.

As Alice is drawn into the witchcraft accusations that are sweeping the North-West, Fleetwood risks everything by trying to help her. But is there more to Alice than meets the eye?

Soon the two women’s lives will become inextricably bound together as the legendary trial at Lancaster approaches, and Fleetwood’s stomach continues to grow. Time is running out, and both their lives are at stake.

Only they know the truth. Only they can save each other.

I had been so excited to read The Familiars, my hometown in Barnoldswick, Lancashire sits in the shadow of Pendle Hill and as a little girl I was always fascinated by the stories of the Pendle Witches. Imagine my delight when I first heard about The Familiars and was then lucky enough to receive a proof copy, at last a novel set in my locality, but would I be disappointed?

I can happily say that I wasn’t. I adored the characters, none more so than Fleetwood Shuttleworth, a young woman who clearly adored her husband, Richard, yet couldn’t give him the one thing he so desperately wanted, a son. You would have expected a woman of her status to be vain, a woman used to the luxuries of her position, and a naivety that betrayed her age, a mere seventeen years old, yet she was none of those. To my utter delight Fleetwood was bold and brave, almost tomboyish, and her determination to fight injustice on behalf of her midwife and friend Alice Grey saw her risk everything and more.

Alice Grey was the young women who promised to safely deliver Fleetwood’s baby, to ensure that Fleetwood herself also survived. She was hardworking, caring, poor, a victim of circumstance that put her own life in danger, but you couldn’t help but love her gentle, caring nature, and admire her iron will and strong instinct for survival. Fleetwood and Alice’s relationship was touching and heartwarming, each finding in one another what they had failed to find elsewhere, friendship.

The imposing and beautiful Gawthorpe Hall and the surrounding countryside provided the perfect setting, and Halls’s narrative captured its essence beautifully. I loved reading about the towns of Padiham and Colne, so close to myself, yet now so very different. Halls gave a real sense of their vibrancy, of the dirt and grime and the grinding poverty that many found themselves in. Set against all this were the witches, women who only sought to help people, using old wives tales, potions and sayings that many so clearly misunderstood, and often for their own  personal reasons. The villains of the novel, were just that, villains, who you loathed from the moment you met them, none more so than Roger Nowell, chief witch hunter, and the man I would quite happily have sent to the same fate he wished to send his supposed witches!  I wasn’t quite sure about Fleetwood’s husband Richard, at first I liked him, then well, you will have to read and find out.

But what about Fleetwood? Oh how I cheered her on as she stood up to Roger and his cronies, as spoke out of turn and placed herself in danger, she was truly a woman ahead of her time  and I loved her all the more for it.

The Familiars wasn’t a novel that gave you the luxury of time, its narrative was fast and furious, packed with drama, Halls throwing everything at you from wind, rain, darkness, witchcraft and vile, ignorant people intent on destroying the innocent. It wasn’t all darkness, there were the odd glimmers of hope and light but would there be a happy ending? I know that I wanted one, but at times I wasn’t quite sure I would get one, all I knew was that Fleetwood was a true heroine, a truly remarkable young woman, a wonderfully created character, testament to the skills of the author.

The Familiars will have you hooked from page one and I read in two sittings as I travelled to and from London so if you are planning on reading, put some time aside, get comfy on the sofa with a large mug of tea and enjoy!

P.S any TV production companies out there, please option The Familiars, it would make the most fanatsic drama series!

I would like to thank Bonner Zaffre fro a copy of The Familiars to read and review. 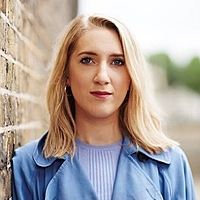 Stacey Halls grew up in Rossendale, Lancashire, as the daughter of market traders. She has always been fascinated by the Pendle witches. She studied journalism at the University of Central Lancashire and moved to London aged 21. She was media editor at the Bookseller and books editor at Stylist.co.uk, and has also written for Psychologies, the Independent and Fabulous magazine, where she now works as Deputy Chief Sub Editor. The Familiars is her first novel.