HOW DO YOU SOLVE A CRIME WHEN YOUR OWN BODY IS FIGHTING AGAINST YOU?

Something devastating has taken place here in these mountains. Something that requires all my investigative abilities.
My name is Teresa Battaglia, I am a police chief inspector and I walk through hell every day. It’s not my gun, nor my uniform: my real weapon is my mind. Yet my mind is failing me…
My name is Teresa Battaglia, I have a secret that I dare not reveal even to myself, and for the first time in my life I am afraid.

In the village of Travenì, surrounded by the majestic beauty of the Italian Alps, a series of violent assaults take place.

When the first body is found in the woods, Police inspector Teresa Battaglia quickly realises her decades of experience as a profiler will not be enough to solve what looks like the work of a profoundly deranged mind. Soon more victims are found and when a new-born baby is kidnapped, Teresa’s investigation becomes a race against the clock.

But Teresa is also fighting a different kind of battle: against the silent reticence of a community determined to protect a secret legacy of shame; and against her own body, weighed down by age and diabetes, and her mind, once invincible and now slowly gnawing away at her memory…

I have to admit to some trepidation when I started Flowers Over The Inferno. Was it going to be just another crime novel? Would the translator get the essence of the characters and the authors narrative? I needn’t have worried, the translation was top notch and the novel absolutely superb.

Why? The characters were more than interesting and absorbing. Lead investigator, Superintendent Teresa Battaglia wasn’t your average detective, she was older, ill with diabetes and hid her past and present circumstances from those around her. It was only the reader that got to know the real Teresa, the one filled with fear and pain. On the outside she was tough, unforgiving, intolerant, only the odd crack in her facade appeared as the relationship between herself and Inspector Massimo Marini developed.

Massimo Marini, the new kid on the block, the outsider was a man to be admired as he persisted in his attempts to impress his new boss. You could tell this would be the start of a very good relationship as somehow they complemented each other, each working to their strengths to solve the murders.

The crimes were horrifying and Tuti was unflinching in her descriptions, which were definitely not for the faint hearted. Don’t be put off as there was more to them than simple violence and that is what was so interesting about the direction this novel took. It wasn’t necessarily about the horrifics of murder, for me, it was more about us as human beings. What makes us who we are? How does our upbringing affect our adult life and would it necessarily turn us into a murderer?

Tuti’s exploration of these themes was absolutely fascinating and at times heartbreaking as she delved deep into past and history of the small ski town of Traveni to answer those questions. The intermingling of past and present was seamless and slowly, before even Teresa and Massimo had worked out and brought all the varying strands together, you knew what happened, who the murderer was. The only question left was how they would learn all the facts, how they got there and would they be in time before more victims turned up amongst the forests of Traveni.

As with all good crime novels it didn’t happen easily and Massimo and Teresa had to use all their skills and a bit of luck to get there. Their journey was fast paced, intense and the latter parts of the novel both dramatic and heartrending. The landscape played an important part, the snow, the deep, dark, dense, forest and the starkness of the quarries and caverns were brilliantly described and intertwined, pitting itself against the police, thwarting them at every turn and provided the perfect camouflage for our perpetrator. The themes of man’s need to develop, to cut back the environment, to protect the tourist industry played a part but remained in the background.

It was this heady mix of the human psyche, the horrors of  the past, the environment and the two wonderful characters of Battaglia and Marini that made this novel so good, so immersive and for me just brilliant.

I would like to thank W&N for a copy of Flowers Over The Inferno to read and review and to Virginia Woolstencroft for inviting MY Bookish Blogspot to participate in the blogtour. 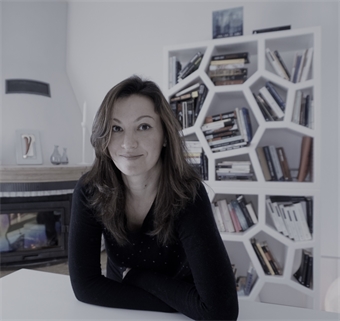 ILARIA TUTI lives in Friuli, in the far north-eastern part of Italy. FLOWERS OVER THE INFERNO, her debut novel and the first book in the Teresa Battaglia trilogy, was a top 10 bestseller on publication and the biggest debut of 2018 in Italy.