She’s remembering curtains closed against whatever might harm them and all the knick-knacks: the porcelain fairy, the chain of rubber dolphins, CDs piled a metre high. This was what home meant.

It’s the summer before high school and Chloe’s been sent to her grandparents because her mother can’t cope. At first, all Chloe wants is to go home, but when she falls in with a feral gang of local boys, life takes a darker turn. By the time summer ends, Chloe will have learned where the greater danger lies.

Primary school is over and you are ready to begin at High school, when you are unceremoniously dumped at your grandparents for the summer holidays. This was the situation that Chloe found herself in, a situation author Daniel Shand used to brilliant effect to tell us the story of a young girl who was not quite sure how she fit into the world.

Her life with Mum had been chaotic, numerous boyfriends trooping in, and out, alcoholic tendancies and mood swings that would leave even an adult wondering just what the hell was going on.

Shand took us on a journey deep into Chloe’s psyche as she tried to make sense of it all. I found myself feeling a tumult of emotions as Chloe grappled with her thoughts, with her confusion. You knew that she loved her Mum, but did she really want to live a life full of unpredictability, or did she want to be just like any other normal young girl, enjoying a life full of friends and freedom.

I couldn’t help but feel anger towards her Mum, wanted to get hold of her, shake her  and make her realise what a mistake she was making. Yet, as the novel progressed you began to realise that Mum was not quite right, that maybe she had mental issues that she couldn’t control. Shand’s narrative was wonderfully evocative as he wrote of her slow downward spiral, as Chloe became the parent, desperately trying to look after her Mum. You wondered how it would end, you hoped that all would be ok and that Chloe and, indeed her Mum would get the help she so desperately needed. Shand handled this part of the novel with wonderful skill, it was measured, and realistic and never descended into the ridiculous, the unbelievable.

You might think that it was all doom and gloom. I can happily report that Shand provided some light relief in the form of Chloe’s friendship with Ally, Chris and Darryl. Their growing friendship showed Chloe what her life could be like, the stability she could enjoy, the nagging dread of her Mum’s unpredictability left far behind. Their antics were typical of kids exploring their surroundings, of pushing the boundaries, often with dire consequence but it provided the balance that the novel needed to prevent it from becoming too maudlin, and negative.

I loved her grandparents, their relationship, the love that they had for each other, and for Chloe, the interaction between Chloe and her Grandad was particularly touching. You could forgive them for their lack of understanding and helplessness in trying to help their daughter, at they strove to do the best they could for their young granddaughter.

Crocodile could be described as your typical coming of age novel, but I don’t believe it should be placed in that category, it is so much more than that.  Yes, Chloe was growing up trying to make sense of  her world, but it was also a story that fits so neatly in today’s society. How many other children like Chloe are experiencing the same issues, how well do we understand them, or even know how to reach out and help them? A lack of resources within social services mean that more children are struggling with the effects of a parents mental health, their need for help goes unnoticed until crisis point is reached or tragedy strikes.

I don’t believe that Shand wrote Crocodile to highlight this or to have a dig at the current state of our social services. What I firmly believe is that Shand has a brilliant talent, a talent that can get to the very core of his characters, and have an unflinching understanding of the many facets of human nature, both good and bad.

It was a novel that enthralled, and immersed me in the world of one very special young girl, who I will not forget for a long time.

I will now be tracking down a copy of Shand’s previous novel, Fallow, and waiting for his next novel to appear!

I would like to thank Daniel Shand and Sandstone Press for a copy of Crocodile to read and review. 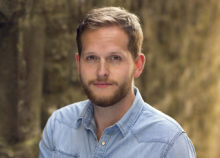 Daniel Shand is a writer based in Edinburgh. His debut novel, Fallow, was published in 2016 and won the 2017 Betty Trask Prize. His second novel,Crocodile, is published in late 2018. He was born in Kirkcaldy in 1989 and has lived in Edinburgh since 2011, where he teaches at Napier University. His shorter work has been published in a number of magazines and he has performed at the Edinburgh International Book Festival.

He won the University of Edinburgh Sloan Prize for fiction and the University of Dundee Creative Writing Award. In 2016, Daniel was the winner of the Saltire Society International Travel Bursary for Literature.

More information about Danile Shand and his books can be found  at :https://www.daniel-shand.com/