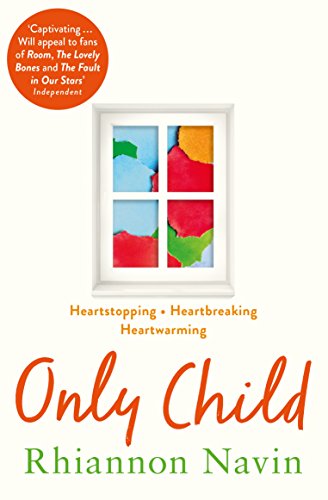 Squeezed into a coat closet with his classmates and teacher, first grader Zach Taylor can hear gunshots ringing through the halls of his school. A gunman has entered the building, taking nineteen lives and irrevocably changing the very fabric of this close-knit community. While Zach’s mother pursues a quest for justice against the shooter’s parents, holding them responsible for their son’s actions, Zach retreats into his super-secret hideout and loses himself in a world of books and art. Armed with his newfound understanding, and with the optimism and stubbornness only a child could have, Zach sets out on a captivating journey towards healing and forgiveness, determined to help the adults in his life rediscover the universal truths of love and compassion needed to pull them through their darkest hours.

To celebrate the release of the Only Child in paperback I have reposted my review from earlier this year when I was lucky enough to be invited to participate in a blogtour for the hardback release.

Told from Zach’s  perspective, Only Child holds nothing back in its physical descriptions nor the psychological trauma the school shooting has on Zach and his family.

The opening chapter is horrifying as Zach hides in a cupboard with his teacher and the rest of his class listening to the ‘pop, pop, pop’ of gunfire. What could  possibly be more terrifying to a young seven year old boy, a terror that Navin describes in such vivid detail that I could feel my own heart pounding, willing the gunman to pass them by, for the children to hold in their sobs until it was over.

Zach’s once innocent world is no more and to discover that his brother Andy was one of the victims, makes the ensuing pages all the more poignant and traumatic. Navin is brilliant at getting to the very core of Zach’s emotions and in some ways he deals with it so much better than his parents. I think Zach’s age and his lack of worldly experience made it much easier for him to deal with the trauma in his own way. The little things he uses to cope, colours and books, enable him to make some sense of the events, to separate his emotions and feel slightly less confused.

What detracts from Zach’s total abilty to deal is the emotions of his parents, and their inability to see the destructiveness their own emotions and battles are having on Zach. I found I had huge empathy for Zach’s dad, who really tried to understand Zach and to help him. His Mum, became so wrapped up in trying to avenge Andy’s death that I really didn’t like her or feel any kind of empathy, in fact I wanted to grab hold of her and tell her to stop, to concentrate on her one remaining son and put all her energy into helping him.

What I admired above all else was the pure simplicity and innocence of Zach’s thoughts, and actions, his need to heal those around him, to make things better. Navin has created a voice that resonated with me, that left me feeling just a little emotional and drained.

The Taylor’s could have been portrayed as the quintessential perfect American family but Navin, to her credit, didn’t and that made the novel all the more realistic. Andy was definitely not the perfect son, having major anger issues that created a rift and endless arguments between his parents.  Other incidents point to a family that would have hit crisis point irrespective of a mass shooting, that events merely speeded up the breakdown.

We often wonder and I certainly do how a family can begin to heal and repair after such an ordeal. How do you begin to get over the anger, the grief, sorrow and loss? What Navin’s novel highlights is that it is often the children that lead the way, that have the strength, will and tenacity to force parents to begin the healing process, all of which Zach has in abundance.

Only Child, is not a comfortable read and nor should it be. Its a heartbreaking and poignant novel that is both timely and relevant in today’s society. It is not a novel I shall forget for a long time.

Rhiannon Navin grew up in Bremen, Germany, in a family of book-crazy women. Her career in advertising brought her to New York City, where she worked for several large agencies before becoming a full-time mother and writer. She now lives outside of New York City with her husband, three children, two cats, and one dog. Only Child is her first novel.