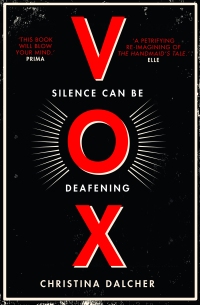 Neurolinguist Dr Jean McClellan, has become a woman of few words. One hundred words per day to be exact; any more and a thousand volts of electricity will course through her veins. She is not alone. Now that the new government is in power, no woman is able to speak over this limit without punishment. Books are forbidden, bank accounts transferred to the closest male relative and all female employment suspended,
while young girls are no longer taught to read and write. But when the President’s brother suffers a stroke, Jean is temporarily given back her voice in order to work on the cure. But things are not as they seem and Jean soon discovers that she is part of a much larger plan, to silence voices around the world for good.

You are female, you are not worthy of a proper education, holding down a job, making decisions, you cannot read a book, have an email account or even check the post. So what can you do? Well if your Jean McClellan, previously a world leading neurolinguist, you can stay at home, be subservient to your husband, look after the home and your children and be very bored and unhappy.  But what marks Jean McClellan and all the other women in Dachler’s novel from all the rest is that in any one day they may only speak #100WORDS.

Their #100WORDS are chosen with care and precision, there are no throwaway comments, no jokes no detailed conversations. One word over the #100WORDS an electric shock is delivered via a locked wristband. To say I was shocked when I started Vox would be an understatement, and the first thing I did was to try and imagine what I would do in similar circumstances. To be honest I am not really sure what I would do but I knew I would be just as miserable and as unhappy as Jean, but that I would also fight, fight for my rights to be a woman, to live a normal life.

What I loved above all else about Vox was Dachler’s portrayal of her main protagonist Jean. Yes, Jean was highly intelligent, but she had guts and determination, she grasped every opportunity to push the boundaries and to fight, not only for herself but also her daughter and the countless other women silenced and cowed by a male dominated society. Where Dachler excelled was her ability to highlight Jean’s vulnerabilities, her lack of confidence and her continual questioning of her actions, in particular her loyalty toward her husband and son. Her situation was extreme but, to some extent, women face the same dilemmas in everyday life, how much of ourselves do we give up, without losing who we are, or who we want to be? How many societies, in the world today still suppress women, deny them an education and more importantly a voice?

That is what was so good about Vox, it wasn’t just your average run of the mill thriller, it was so much more. It constantly asked questions, made me think, what #100WORDS would I chose, how would I feel to be silenced, to have my identity stripped from me, to have my male children question me, look down on me and have a husband who could do what the hell he liked with me.

Using other female characters Dachler was able to show an alternative version of Jean, the women who clearly embraced their silence and who were happy with their role within society, providing a balanced and two sided view of their world.

One of the most scariest aspects of the novel and again can be found in certain places today, is the power one man or a small group can wield within Government, how social media, TV, Radio, school and colleges can be used for rhetroic and propaganda to make a society believe whatever they want them to believe.

There is so much to Vox that it would take forever to write it all down, but whilst the suppression of women was at the heart of the novel, it was also a damn fine thriller. The pace is unrelenting, my page turning furious, the drama never ending and a couple of superb twists that made VOX unputdownable.

It is definitley one of the best novels I have read so far this year and I urge everyone to borrow from you library or go out and buy as it is just superb.

I would like to thank Lily Capewell at HQ for a copy of Vox to read and review.

Christina Dalcher earned her doctorate in theoretical linguistics from Georgetown
University. She specializes in the phonetics of sound change in Italian and British
dialects and has taught at universities in the United States, England, and the United
Arab Emirates.
Over one hundred of her short stories and flash fiction appear in journals worldwide.
Recognitions include the Bath Flash Award’s Short List; nominations for The Pushcart
Prize, Best of the Net, and Best Small Fictions; and multiple other awards. She teaches
flash fiction as a member of the faculty at The Muse Writers Center in Norfolk, Virginia.
VOX is her first novel, and has been longlisted for the 2018 Not The Booker Prize.