I am absolutely delighted to be part of the blogtour for Janie Millman’s novel Sky’s The Limit. Janie has very kindly written a short piece for my blog where she shares her love for wine and the region of France in which he noe resides, and which provided the inspiration for her novel.

I do hope you enjoy it and it inspires you , like myself to read the novel.

Before Janie’s article here is a brief synopsis of Sky’s The Limit.

Sky is devastated when she finds that her husband is in love with someone else, even more
that it is her oldest friend, Nick. She has lost the two most important men in her life and
can’t ever trust either of them again.
To escape, she goes alone on a dream trip to Marrakesh and meets Gail, on a mission to
meet the father of her child, a man she loved but thought did not want her.
In Marrakesh, Sky and Gail both find unexpected joys – and surprises. For Sky, these lead to France, to a
beautiful Chateau and a family whose relationships seem as complicated as her own.
With a rich cast of characters, beautiful locations and an ending that will make you smile, this is the perfect
summer read.

I’ve always loved wine. I’ve never been much of a connoisseur but I’ve always known what I like to drink. I like a dry white, a fresh rose, a fruity red – and I like fizz, in fact I especially like fizz.

Living ten minutes from St Emilion and forty minutes from Bordeaux, in what is arguably one of the most famous wine regions in the world, you do tend to pick up a few things along the way and my knowledge of wine has improved vastly since living here.

I have swirled and gurgled and swallowed and spat – well actually I never really do much of the spitting! I have been on numerous tastings, visited the large and the not so large chateaus and sampled some of the best and some of the worst the area has to offer.

We are lucky to include amongst our friends a couple of chateau owners, an oenologist and a flying wine maker – no that really is his title! It is fascinating to learn how the wine is made, how it is blended, what percentage of which grape is used and why; what makes a vintage year… It is a magical mix between science and nature.

My hometown of Castillon La Bataille is surrounded by vineyards stretching as far as the eye can see, and I became intrigued by the idea of the wine business passing down the generations. I wondered how they kept up with the competition, what marked out a truly great wine. I tried to imagine the conversations around the dinner table, the differing opinions, the various roles of the family members. I so wished I could be a fly on the wall but the next best thing was to write about it so that’s what I decided to do.

There was one chateau in particular that always caught my eye. It was on the road to St Emilion, it certainly wasn’t the grandest but it had a certain magic about it, a certain fairy like quality and it became Chateau Fontaine in Sky’s The Limit.

I very much doubt that it has a young girl cartwheeling on the front lawn watched by a small piglet or an elf on a unicycle but there may well be a rather handsome owner striding between his army of vines. I hope so.

I also learned that, like any other commerce, the wine trade has a murky side. I’ve heard rumours and whispers of secret scams, scandals, bribery and corruption.

Frankly I always love hearing about the seedier side of life, it fascinates me and I wanted to explore this further and write about this darker side of the wine business.

I am so lucky to be living here. I’ve fallen in love with the grace and charm of the area and the gentle pace of life. I adore the food, the drink, and of course the markets. I wanted to give my readers a small slice of South West France with all that it has to offer.

I would to thank The Dome Press for a copy of Sky’s The Limit to read and for inviting My Bookish Blogspot to participate in the blogtour. 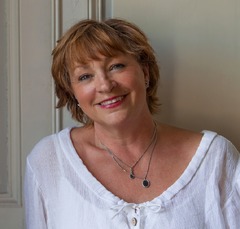 Janie Millman is an actress, writer and co-owner of Chez Castillon.
She met Mickey, her husband, playing romantic leads in a summer season of comedies at The Little Theatre, Sheringham, on the Norfolk coast. Both actors for more than twenty years, their roles have ranged from Ninja Turtles, to acting in Olivier Award-winning stage productions and working on-screen with Hollywood stars.
Although still acting, Janie is now concentrating on writing. Her debut novel, Life’s A Drag, was published first in July 2015 by Accent Press and went on to receive highly acclaimed reviews.
It was then rebranded by The Dome Press and republished in February 2017.
Janie’s next book with The Dome Press, Sky’s the Limit, will be published in August 2018.

If you enjoyed Janie’s article follow the rest of the blogtour to discover what my fellow bloggers thought about her novel Sky’s The Limit.