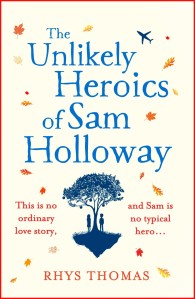 This is no ordinary love story and Sam is no typical hero…but he is a hero.
Sam Holloway has survived the worst that life can throw at you. But he’s not
really living. His meticulous routines keep everything nice and safe – with just one
exception…
Three nights a week, Sam dons his superhero costume and patrols the streets. It
makes him feel invincible – but his unlikely heroics are getting him into some
sticky, and increasingly dangerous, situations.
Then a girl comes into his life, and his ordered world is thrown into chaos … and
now Sam needs to decide whether he can be brave enough to finally take off the
mask.
Both hilarious and heart-warming, this is a story about love, loneliness, grief, and
the life-changing power of kindness.

We all love a superhero and San Holloway was no exception, except Sam was a superhero with a difference. Sam had no superpowers and his myriad of natty gadgets were bought from EBay and Amazon, his brushes with the forces of evil both funny and endearing. In fact Sam was totally endearing throughout, almost childlike at times as he fought to control the events around him, and envelop him in his safe cocoon that prevented grief and things past from swamping him. I loved his naivety when faced with his growing love for Sarah, his inability to recognise or ignore his emotions and let love in.

When Sam finally revealed the reasons for is present life I could not help but feel huge sorrow, tinged with a small bit of frustration at Sam’s present life, at the opportunities and his inability to live the life that every twenty odd year old should live. I loved the way in which Thomas used Sarah and the other characters within the novel to slowly chip away at Sam’s armour, to break the outer shell and allow Sam to try and reconcile the past, to deal with his emotions and try and move on.

Whilst many characters in the novel chose drugs or alcohol as their addiction Sam’s superhero addiction was both funny and moving. It was a persona that allowed Sam to escape the everyday mundanity of life, not least his emotions. I loved his fearlessness as his nightly escapades became more dangerous and he became somehow braver in his pursuit for justice, driven by his inner demons. I felt, that at times he was hurtling towards self destruction, pushing the boundaries, yet I admired his attempts to right the wrongs of a modern day society.

The love story element was poignant and at times very emotive and never descended into what I would call  mush, Thomas portraying two life wounded characters who struggled to break away from the past and let love in. All I wanted was them to realise their love and to have a happy ending, and it certainly made me turn the pages just that little bit quicker to find out if they really do have that happy ending!

I particularly admired the balance Thomas achieved between the serious and the humorous, never plunging the novel into total despair, even if some of its themes are not not necessarily happy ones.

It is a novel of loneliness, grief and love and the ability that we have in all of us to reconcile the past events, move on and find happiness. It is a novel that I loved, that made me laugh and smile and brought a tear to my eyes, whilst introducing to the most wonderful character, Sam Holloway. It is a novel that will stay with me for a long time.

I would like to thank Wildfire Books for a copy of the novel to read and review and toe Anne Cater of Random Things Tours for inviting My Bookish Blogspot to participate in the blogtour.