Bad by Chloe Esposito  Michael Joseph  July 26th 2018
She stole the life she wanted. Now someone wants to steal it back . . .

Alvie Knightly may be waking up in the Ritz, but her life is no bed of roses.

Firstly, she has the mother of all hangovers.

Secondly, her beautiful, spoiled twin sister Beth has just been found dead in Sicily – and the police want Alvie for questioning.

And thirdly, Alvie’s hot new boyfriend has vanished with every penny of the millions they stole from Beth.

But he picked the wrong girl to mess with.

Alvie will pursue her ex to Rome in a game of cat and mouse that only one of them can survive.

Hell hath no fury like a woman scorned . . .
But can Alvie get revenge before her crimes catch up with her?

Just when I thought I had escaped the clutches of Alvie in Mad, she reappeared in Bad, and I did wonder if her antics would be quite as thrilling and outlandish as they were in Mad.

I needn’t have worried! In the more than capable hands of Chloe Esposito, Alvie was just as outrageous, and yes even worse than in Mad. Now if you haven’t read Mad, do not worry as the opening chapter recaps everything that happened, before picking up where Mad left off. Alvie’s opening scene, couldn’t have summed her up better, as she vomited in the toilet of her Ritz hotel bathroom, after drinking copious amounts of alcohol, drowning her sorrows after her supposed love interest Nino disappeared with all her money.

Things take a turn for the worst when her twin sisters body is found and her option of an alternative identity thrown out the window.  Never one for sitting down and doing nothing Alvie took me on a madcap journey across Europe as she hunted both Nino and her money.

Because Bad is the second part of a trilogy it allowed Esposito to develop and reveal more of Alvie’s character. She gave us glimpses of her past, her difficult relationship with her Mum and twin sister, perhaps a clue to the person she was now. Some of it made you feel sorry for her, but that didn’t last long as her behaviour made me laugh and exclaim in disbelief. I loved her inability to be practical, to think more of her appearance, of her need for expensive designer clothes and total superficiality. I was continually looking for a chink in her behaviour, in her selfishness, and perhaps a glimpse of a nicer person but no chink was forthcoming.

Yet, this was the whole point, here was a character running amok, every action more outrageous than the next, making me laugh out loud and wondering just what she would do next.

Esposito’s narrative was as fast and furious as Alvie, I never knew just what was going to happen next and when things did happen it was never predictable, always a surprise.

Bad is certainly not a book for the fainthearted, Esposito never skimped on violence, sex and drugs and it may not be to every readers liking, happily I loved it. I was moving house at the time, and Bad was perfect escapism, taking me faraway from packing boxes and numerous trips to the local tip!

It is the perfect summer beach read and I cannot wait for the final installment.

I would like to thank Michael Joseph for a copy of Bad to read and review and to Katie Ashworth for inviting My Bookish Blogspot to participate in the blogtour.

Chloé Esposito is from Cheltenham and now lives in London. She has a BA and MA in English from Oxford University, where her dissertation focused on 19th-century feminist writers. She has been a senior management consultant, an English teacher at two of the UK’s top private schools and a fashion stylist at Condé Nast. She is a graduate of the Faber Academy and is now writing full-time. 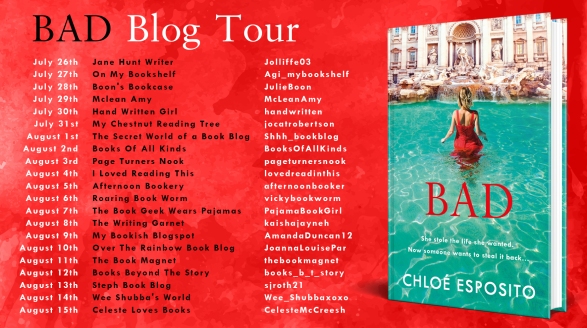