Marion Zetland lives with her domineering older brother, John, in a decaying Georgian townhouse on the edge of a northern seaside resort. A timid spinster in her fifties who still sleeps with teddy bears, Marion does her best to shut out the shocking secret that John keeps in the cellar. Until suddenly, John has a heart attack and Marion is forced to go down to the cellar herself and face the gruesome truth that her brother has kept hidden. As questions are asked and secrets unravel, maybe John isn’t the only one with a dark side.

If you are looking for a fast paced action packed thriller then this is not the book for you. If on the other hand you like a novel that is full of suspense, and hints of something truly sinister with characters who are dark and chilling then you are going to love The Visitors.

Before that I became immersed in the story of Marion, an almost childlike fifty something with low self-esteem little confidence and totally ruled by her elder brother, John.

Marion does everything for John, cooking, washing and generally pandering to his every demand, with an awareness that what he does in the cellar is not nice burying the knowledge deep within herself, denying its existence. What intrigued from the outset was how Marion ended up in her present situation, the reasons for her lack of action and lethargy, and what a back story she had!

Burns Portrayal of a family with little or no apparent love and affection, particularly, for Marion was superb. It was almost as if the family existed in their own world, with their own rules, an oddity in an increasingly modern world. I loved the image Burns conjured of Marion’s mother, a woman who adored her son, yet remained indifferent to her daughter, her ideas somehow slightly warped, and you knew exactly why Marion was the way she was.

Marion herself, at first glance, seemed one dimensional, what you saw is what you got, but it wasn’t long before Burns began to drop little hints and subtle undertones of a woman with many sides, of something more sinister lurking underneath. I wanted to scream at her to stop aiding her brother, to stand up for herself and break away and when John had a heart attack, I urged her on, as she gained more confidence before recoiling in horror at subsequent events and the real Marion emerged.

I felt I had more questions than answers as the novel drew to a close, not in an unsatisfying way but in a manner that let my imagination run riot. I liked that I felt a distinct chill run down my spine as I read and the underlying menace in the narrative was superbly done. Its compelling and immersive and I am hoping that it will not be long before Burns’ produces another novel.

I would like to thank Imogen Harris and Legend Press for a review copy to read and review and for inviting My Bookish Blogspot to participate in the blog tour. 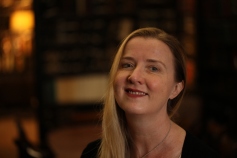 Residing in Manchester, Catherine Burns is a graduate of Trinity College Cambridge. She worked as a bond trader in London before studying at the Moscow Institute of Film, and teaching film theory at Salford University. The Visitors is her debut novel.
Follow Catherine on Twitter@C_Burnzi

Discover what my other fellow bloggers thought about The Visitors by following the blogtour.

One thought on “#Blogtour The Visitors by Catherine Burns @C_Burnzi @Legend_Press”