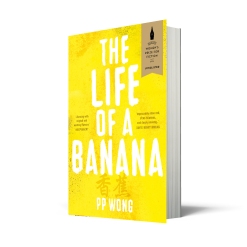 Xing Li is what some Chinese people call a banana – yellow on the outside and white on the inside. Although born and raised in London, she never feels like she fits in. When her mother dies, she moves with her older brother to live with venomous Grandma, strange Uncle Ho and Hollywood actress Auntie Mei. Her only friend is Jay – a mixed raced Jamaican boy with a passion for classical music. Then Xing Li’s life takes an even harsher turn: the school bullying escalates and her uncle requests she assist him in an unthinkable favour. Her happy childhood becomes a distant memory as her new life is infiltrated with the harsh reality of being an ethnic minority. Consumed by secrets, violence and confusing family relations, Xing Li tries to find hope wherever she can. In order to find her own identity, she must first discover what it means to be both Chinese and British.

Imagine being 12 years old, your father is dead and now your mum is dead too. Its just you and your brother and you are sent to live with your estranged Grandmother, Auntie Mei and Uncle Ho. This is the situation Xing Li finds herself in and oh, how she tugged at my heartstrings.

All this young girl wanted was love and comfort in her grief, instead she got a Grandmother who was harsh, strict and seemingly lacking in any emotion. Uncle Ho had serious mental issues and Auntie Mei, although sympathetic was to busy with her acting career. To make matters worse Xing Li is the subject of intense bullying at her new private school with teachers and her Grandmother seemingly reluctant to do anything about it. her one saving grace was the friendship with Jay, another mixed race student who befriends her, understands her and helps her to deal with the bullies.

Ok, so that all sounds utterly depressing, and yes it is but what Wong does so well is mix in some great one liners and some brilliant humour, primarily supplied by Xing Li’s Grandmother. In fact, her Grandmother was my favourite character. A woman steeped in tradition, and an attitude on certain aspects on life that had me chuckling away to myself. She is a character with a harsh exterior but with a soft centre hidden deep down in the depths of her persona.

I loved Auntie Mei who appeared superficial on the surface, ruled over by the iron will of her mother, yet inderneath she was the only one who showed Xing Li any love, who harboured deep regrets but appeared reluctant or unable to do anything about them.

Xing Li’s brother was our typical teenage rebel, getting into trouble, before being banished from the house leaving Xing Li alone.  It would have been very easy for Wong to allow Xing Li to wallow in self pity and plummet to the the depths of despair. In a way she did, but what stood out for me was Xing Li’s tenacity, her bravery and her strength. Somehow a series of revelations and events force Xing Li to take control of her life to look beyond the harsh exterior of her Grandmother. More importantly Wong used Xing Li to highlight the racism and ignorance that mixed race people encounter in our society, how much harder it is for them to be accepted and to fit in. Wong didn’t labour the point but allowed the characters to tell the story in a narrative that was brilliantly compelling and completely immersive.

She made me feel a huge range of emotions from anger and disbelief to laughter and hope. Its a novel full of insight and hope and is funny and brilliant.

I would like to thank Imogen Harris and Legend Press for a copy to read and review and for inviting My Bookish Blogspot to participate in the blogtour.

PP Wong was born in London in 1982. Her parents, both Chinese and originally from Singapore, moved between London and Asia during her childhood. PP Wong is now a writer and is also editor of www. bananawriters.com, a platform to encourage new East
Asian and South East Asian writers with thousands of readers from over 30 different countries.