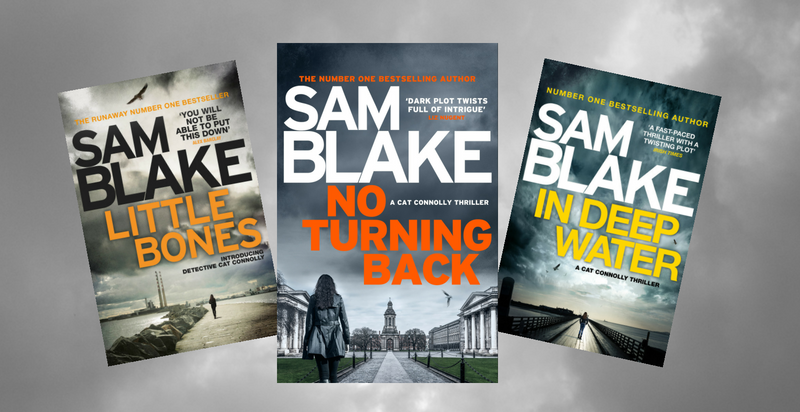 In Deep Water completes the Cathy Connolly Trilogy and, to celebrate Bonnier Zaffre have put together this fabulous blogtour of which I must thank Imogen Sebba for inviting My Bookish Blogspot to participate.

Here’s a little bit about In Deep Water

Cat Connolly is back at work after the explosion that left her on life support. Struggling to adjust to the physical and mental scars, her workload once again becomes personal when her best friend Sarah Jane Hansen, daughter of a Pulitzer-winning American war correspondent, goes missing.

Sarah Jane is a journalism student who was allegedly working on a story that even her father thought was too dangerous.

With Sarah Jane’s father uncontactable, Cat struggles to find a connection between Sarah Jane’s work and her disappearance. But Sarah Jane is not the only one in deep water when Cat comes face to face with a professional killer . . .

In the world of missing persons every second counts, but with the clock ticking, can Cathy find Sarah Jane before it’s too late?

It is my pleasure to share a guest post by the author, Sam Blake, and her fascinating look into the dark world of the internet.

Recently there’s been an explosion in the debate around how much data companies hold on you, and how that all connects online. By aggregating data, companies can learn more about you than your nearest and dearest know, and you can then be targeted for all sorts of reasons – whether it’s to influence your vote or to persuade you to buy chocolate. It’s fascinating and frightening and the perfect background for a crime novel – there are so many aspects to it that you could write a whole series (now there’s an idea). My daughter is 18 and very techie, she’s a font of fascinating information about what’s happening on the web – her friends joke that she should wear a tin hat – she’d very conscious of her online footprint. She first told me about websites that aggregate hacked webcam footage – she’d read about it on Reddit. She wants to do aerospace engineering so the parts of Reddit she hangs out on tend to be populated by engineers, programmers and rocket scientists, and she finds the most interesting stories.

I started thinking about the consequences of a stranger breaking into your world and what damage they could do. I read a brilliant book by Jamie Bartlett called The Dark Net which was all about the start of the internet and how the deep web and the dark web came to be. I found articles about the Silk Road website and Dread Pirate Roberts, as its founder Ross Ulbricht was known. Ulbricht set up the site in 2011 initially to sell magic mushrooms but it literally mushroomed and it became a shop front for suppliers of everything from hard drugs to AK47s.  Ulbricht was arrested in 2013 and convicted of money laundering, computer hacking, conspiracy to traffic fraudulent identity documents, and conspiracy to traffic narcotics in February 2015. He is currently serving a life sentence without the possibility of parole.

But there are many more individuals keen to fill his place – Silk Road made millions of dollars.

The web is obviously a brilliant source for research on itself, but chatting to professional in an area is absolutely invaluable. In the course of a conversation they can say something that sparks a whole new idea. I’m blessed with a fabulous friend Alex Caan who is also a writer (Cut to the Bone/ First to Die  – watch the video for Cut to the Bone here, it’s awesome, but I might be biased as my daughter made it)

Alex is in information systems security for a number of government organisations, and is currently specialising in Terrorism Studies. There is little he doesn’t know! Having a trusted source who you can ask stupid questions is incredibly useful, and one who writes as well? I can’t thank him enough for his help – all while he was doing a PhD and writing his incredible second book First to Die.

Researching worms and viruses online I discovered even more terrifying and interesting things, including the background to the Stuxnet worm that was barely reported when it happened – a cyber-attack on Iran’s nuclear power plants it showed just how powerful cyber weapons could be. At the same time that I was reading about this, the WannaCry virus was attacking the NHS in the UK. It was all becoming very real.

Often with research you can get sucked into an internet rabbit hole of incredibly interesting stuff, but you will only ever use about 15% of what you’ve discovered. Once I had the core idea of what I wanted to write about, I got stuck in and did the rest of my research, checking necessary facts, towards the end. Needless to say I made some mistakes, but my daughter read over the draft and found them all (I hope!). There’s still so much more in this world I’d like to explore. Even with the recent investigations into Facebook etc., I think we have very little idea of what is actually happening with our data and the true power of information.

Sam Blake is a pseudonym for Vanessa Fox O’Loughlin, the founder of The Inkwell Group publishing consultancy and the hugely popular national writing resources website Writing.ie. She is Ireland’s leading literary scout and has assisted many award winning and bestselling authors to publication. Vanessa has been writing fiction since her husband set sail across the Atlantic for eight weeks and she had an idea for a book.