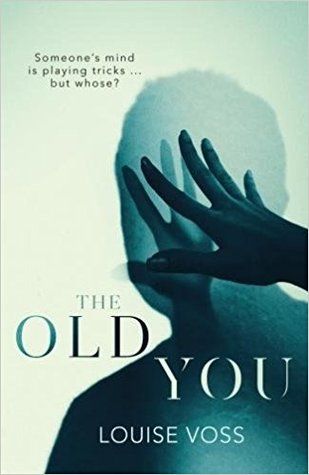 Lynn Naismith gave up the job she loved when she married Ed, the love of her life, but it
was worth it for the happy years they enjoyed together. Now, ten years on, Ed has been
diagnosed with early-onset dementia, and things start to happen; things more sinister
than lost keys and missing words. As some memories are forgotten, others, long buried,
begin to surface … and Lynn’s perfect world begins to crumble.
But is it Ed’s mind playing tricks, or hers…?

The Old You is described as ‘nail-bitingly modern domestic noir and a tense, Hitchcockian psychological thriller’ and I can honestly say it most certainly lived up to its billing.

It all started off with your average everyday happily married couple, except they are having to learn to deal with the husbands dementia diagnosis, the incoherent sentences, forgotten words and the loss of inhibitions. This couple is Ed and Lynn Naismith. Ed, is a retired GP, and significantly older than his wife, and Lynn, is deeply in love with Ed and about to embark on a new career at a music college. Everything on the surface looked ok, I thought to myself as I read and then wallop, suddenly I found myself plunged into a story of betrayal, intrigue and twist after twist after twist.

I soon discovered that the characters had secrets just simmering below the surface. There was Ed, struggling with dementia, a character I instantly disliked, something that didn’t seem right, something that I couldn’t quite figure out the reason why. There was his murdered first wife, her body never found, Ed implicated, but never charged, with no little or no evidence to back up the police’s theories. Did he kill her, did he get someone to do it for him, or was he just a grieving widower the victim of a most heinous crime.

Then we had Lynn, the second wife, stepmum to Ed’s son Ben, the person who put Ed back together, made him happy again. She is the supportive wife, committed to caring for Ed during his illness, yet I got the feeling that maybe she too had something to hide. She was a character that at the beginning I found quite frustrating, then as the story evolved I found myself admiring her tenaciousness, and dogged determination to discover the truth.

Their friends April and Mike, and figures from their pasts were a brilliant supporting cast. They enabled Voss to hoodwink the reader, to drop in a few red herrings, to set your head in a spin as every theory and thought you had was thrown out of the proverbial window and you had to start all over again.

The tension was never ending, the pace unstilting and the latter part of the novel had me wanting to turn the pages quicker than I could actually read the words so great was my need to unravel the truth.

The Old You is fantastically clever and has certainly raised the game in the world of domestic noir.

Over her eighteen-year writing career, Louise Voss has had eleven novels published – five solo and six co-written with Mark Edwards: a combination of psychological thrillers, police procedurals andcontemporary fiction – and sold over 350,000 books. Louise has an
MA (Dist) in Creative Writing and also works as a literary consultant and mentor for writers at http://www.thewritingcoach.co.uk. She lives in South-West London and is a proud member of two female crimewriting collectives, The Slice Girls and Killer Women.