The House Swap by Rebecca Fleet  Transworld Books  May 4th 2018

‘No one lives this way unless they want to hide something.’

When Caroline and Francis receive an offer to house swap, they jump at the chance for a week away from home. After the difficulties of the past few years, they’ve worked hard to rebuild their marriage for their son’s sake; now they want to reconnect as a couple.

On arrival, they find a house that is stark and sinister in its emptiness – it’s hard to imagine what kind of person lives here. Then, gradually, Caroline begins to uncover some signs of life – signs of her life. The flowers in the bathroom or the music in the CD player might seem innocent to her husband but to her they are anything but. It seems the person they have swapped with is someone she used to know; someone she’s desperate to leave in her past.

But that person is now in her home – and they want to make sure she’ll never forget . . .

This is not your standard fast paced thriller, instead the events unravel slowly, pulling the reader first one way and then the other. It is primarily the story of a marriage, that of Caroline and Francis. Drug addiction and an affair have taken their toll and the house swap offers time away and a chance to recapture some of the intimacy and closeness they had lost. What Caroline does not factor in is the clinical, coldness of the house and when she starts to find objects that remind her of past events, their getaway becomes something altogether different.

Fleet was excellent at setting the scene, it wasn’t difficult to imagine the coldness of the house and its stark and minimalistic interior. It perhaps mirrored the coldness that Caroline felt towards Francis and Francis felt emanated from Caroline at times. It certainly made me question what actually happened for their marriage to be so fragile.

What I did like was Fleets decision to tell the story from three points of view, that of Caroline, Francis and the person who they swapped houses with. It gave great insight into their characters and added that little extra bit of intrigue.

I didn’t instantly warm to the characters and found Francis in particular, frustrating. Here was a grown man hooked on pills, letting his life and marriage fall apart around him and seemingly incapable of sorting himself out. It did make me feel sorry for Caroline and I can see why she sought comfort in another man. It didn’t stop me thinking that they were both quite selfish, especially with a young son stuck in the middle of it all.

And then we have the unnamed third character, an unsettling and very chilling narrator, who resided in Caroline and Francis’s flat. This is where I felt Fleet excelled, producing a character who seeks revenge for the past, but perhaps became uncertain as the story progressed about what they would actually achieve, and if it made up for the wrongdoings they believed was done to them.  Fleet was great at immersing me into the characters inner torment and even though I knew what they were doing was wrong I did feel a little sorry for them.

As I said at the beginning this is not your typical fast paced novel, but a novel where the author slowly built the tension and the drama. The flashbacks to the past start to build a picture and just when I thought I had worked it all out, Fleet threw in a surprise. It is a surprise that allowed Fleet to show the human emotion surrounding traumatic life events, the effect it can have on us and how we deal with the consequences.

I wasn’t prepared for the ending and it did take me by surprise, Fleet’s narrative brilliantly capturing the final scene, leaving me a little stunned. It was a perfectly fitting ending to a tense novel full of depth and emotion, and a totally unique approach to the traditional thriller.

Thank you to Poppy Stimpson at Transworld for a copy to read and review and for inviting My Bookish Blogspot to take part in the blogtour. 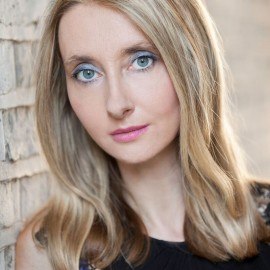 Rebecca Fleet lives and works in London. The House Swap is her first thriller.

There are lots of other fabulous bloggers taking part in The House Swap blogtour.