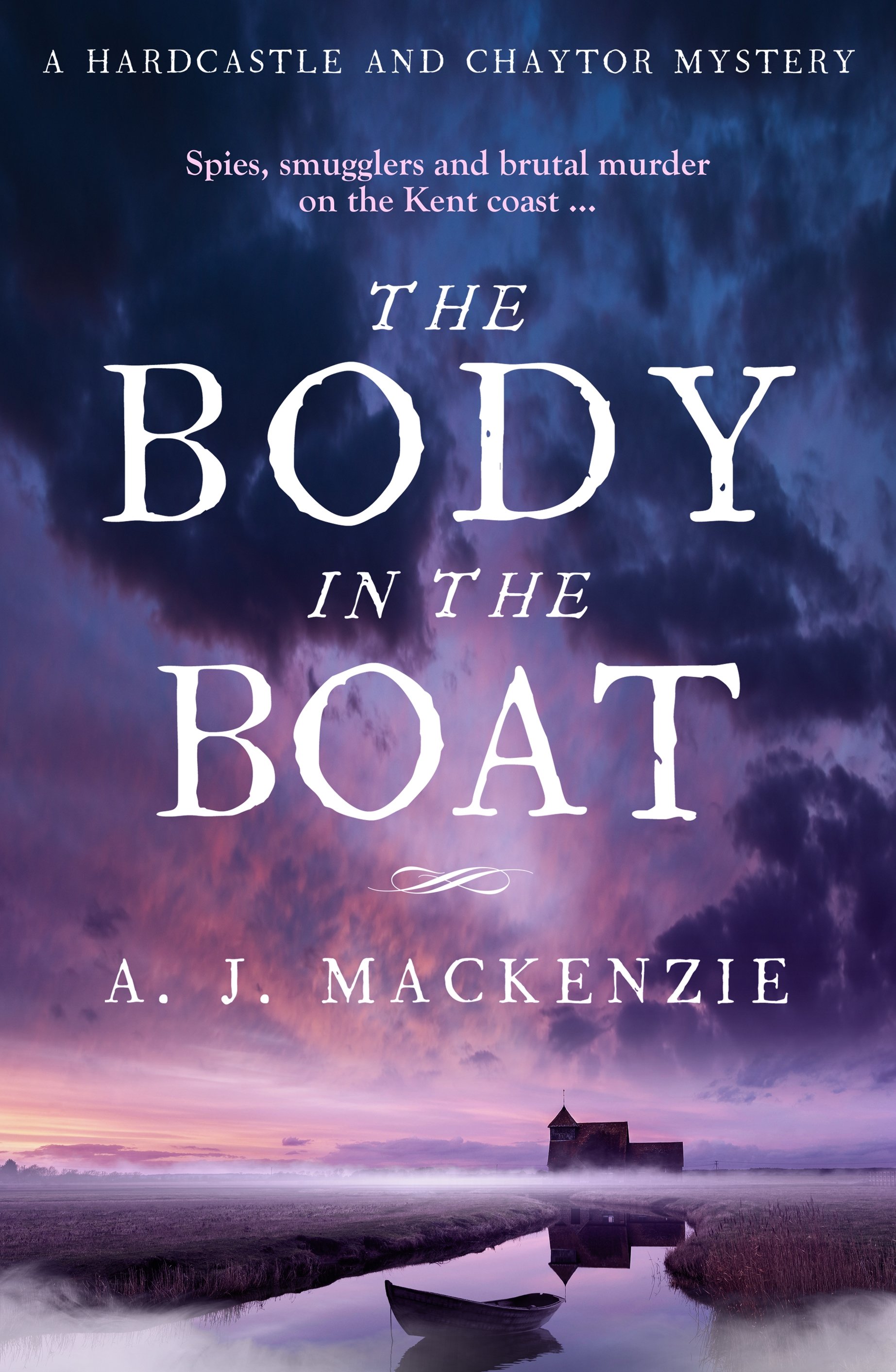 Welcome to mybookishblogspot and my turn on the blogtour for A J Mackenzie’s The Body In The Boat.

A J Mackenzie have very kindly written a guest post, but before I share it, here is a little bit about The Body In The Boat.

Across the still, dark English Channel come the smugglers. But tonight they carry an unusual cargo: a coffin. Several miles inland, a respected banker holds a birthday party for his wife. Within days, one of the guests is found shot dead.

What links this apparently senseless killing to the smugglers lurking in the mists? Why has the local bank been buying and hoarding gold? And who was in the mysterious coffin?

Reverend Hardcastle and Mrs Chaytor find themselves drawn into the worlds of high finance and organised crime in this  dramatic and dark Georgian mystery. With its unique cast of characters and captivating amateur sleuths, The Body in the Boat is a twisting tale that vividly brings to life eighteenth-century Kent and draws readers into its pages.

When the Gentlemen Go By

English folklore has a strange fascination for criminals. From Robin Hood and his outlaws the East End gangsters and the Great Train Robbery, they have been the unlikely heroes of books and films for decades, even centuries.

Smugglers are no exception. Perhaps the most famous evocation of smugglers can be found Kipling’s poem A Smuggler’s Song:

If you wake at midnight, and hear a horse’s feet,

Don’t go drawing back the blind, or looking in the street,

Them that asks no questions isn’t told a lie.

Watch the wall my darling while the Gentlemen go by.

In just a few words, Kipling captures the essence of the smuggling myth: the combination of romance and menace, the notion that everyone knows what happens in the community but no one talks about, the culture of the smugglers epitomised by their mocking nickname for themselves, the Gentlemen. Kipling’s home in the Weald of East Sussex was near the smugglers’ haunts and he would have doubtless heard the local tales. Yes, smuggling was criminal activity; but in the eighteenth and early nineteenth centuries, it was also part of the fabric of English coastal society.

Smuggling came about because of high taxes on imports and exports of certain goods: wool originally, and then later luxury goods such as brandy, gin, tobacco and even things such as hair powder and playing cards. If there was a profit to be made, the smugglers would move it. During times of war, smugglers helped escaped French prisoners get from England back to France; they also helped refugees fleeing persecution get from France to England. And, of course, some of them also dabbled in espionage.

Who were the smugglers? The answer is that they were everyone. There were some organised gangs who, as well as smuggling, turned to all sorts of crime including robbery, blackmail and murder; the infamous Hawkhurst Gang from the mid-eighteenth century is an example. In The Body in the Boat we see another example of a gang branching out from simple smuggling into something much more sinister.

But most of the gangs stuck to straightforward smuggling. They were part-timers, doing one or two runs across the Channel to France each month; in their ordinary lives, they were fishermen, farmers, shepherds, publicans, and yes, even clergymen. Women helped land cargoes and sometimes smuggled tubs of gin under their skirts past the watchful eyes of customs officers. Children acted as lookouts, warning the gangs if the forces of law and order were getting too close.

Smuggling (as with most criminal activities) could often be violent. There are numerous accounts of pitched battles on Romney Marsh and elsewhere between smuggling gangs and the Customs and Excise services. There were also sea battles between revenue cutters and smuggling ships; the latter were often well armed. People were killed on both sides. Smuggling was also a capital offence, punishable by hanging or transportation to Australia. None of this dimmed the appetite for smuggling, however. Why would it, when a man or woman could earn in a night on a smuggling more than they would earn in a month in their day job?

A J Mackenzie is the pseudonym of Marilyn Livingstone and Morgen Witzel, an Anglo-Canadian husband-and-wife team of writers and historians.

They write non-fiction history and management books under their own names, but ‘become’ A J MacKenzie when writing fiction.

You can discover more about Marilyn and Morgan if you visit their website:

Thank you to Imogen Sebba and Bonnier Zaffre for inviting mybookishblogspot to take part in the blogtour.

If you enjoyed the guest post, visit the other bloggers on the blogtour to discover what they thought of The Body In The Boat.