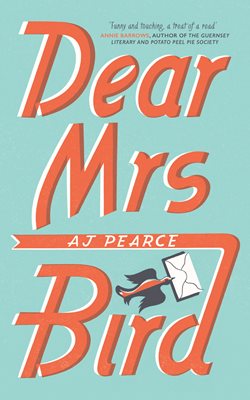 London, 1941. Emmeline Lake and her best friend Bunty are trying to stay cheerful despite the Luftwaffe making life thoroughly annoying for everyone. Emmy dreams of becoming a Lady War Correspondent and when she spots a job advertisement in the newspaper she seizes her chance – but after a rather unfortunate misunderstanding, she finds herself typing letters for the formidable Henrietta Bird, the renowned agony aunt of Woman’s Friend magazine.

Mrs Bird is very clear: letters containing any form of Unpleasantness must go straight into the bin. But as Emmy reads the desperate pleas from women who may have Gone Too Far with the wrong man, or can’t bear to let their children be evacuated, she decides the only thing for it is to secretly write back….

Imagine applying for a job, being successful only to discover its not the job you thought it was. This is exactly what happens to Emmeline Lake, when instead of landing her dream job as a lady war correspondent, she finds herself working for the formidable and infamous agony aunt Mrs Bird. Who wants to spend their time typing responses to peoples problems, certainly not Emmy, but she decides to make the best of it. And that is what this delightful novel is all about, making the best of a war torn London in the middle of the blitz.

The characters are just wonderful. Emmy and her best friend Bunty are fun loving and vivacious, intent on having fun, but also ensuring they do their bit for the war effort, Bunty working in Government, Emmy volunteering at the fire station as well as holding down her job. They enjoy life to the full, taking the odd risk in the blackout, making light of what would have been a frightening and unpredictable time.

Mrs Bird, Emmy’s boss had me in stitches with her refusal to deal with any letters of ‘unpleasantness’, her advice forthright, the epitome of the British stiff upper lip. I loved her sense of self importance and righteousness and my imagination went into over drive at her dress sense and general appearance.

When Emmy decides to respond to some of the more unpleasant letters you just knew things would not end well and they don’t. Her relationships fall apart and Hitler’s bombing ramps up a gear with devastating consequences. It would have been very easy for the novel to descend into absolute doom and gloom but no, Pearce manages somehow, to maintain a lightness to the story, whilst never detracting from the seriousness and devastation of the Blitz.

The descriptions of war torn London were fantastic. I instantly felt myself transported there wether it be to a street devastated by bombing or a dance hall full of those trying to forget. It was heartbreaking to read of the trauma experienced by many families as bombs destroyed everything, and the bravery of the firemen, risking their lives to free those trapped in rubble.

What was extremely interesting was to read of the role many women had during the war, their lives transformed, taking centre stage as they supported the men at war, took on the jobs men would previously have occupied.

What I loved about Dear Mrs Bird was the perfect balance Pearce achieved between the serious and the fun. It never felt bogged down in the horrors of the Blitz, there was always a light and joyful tone to the writing. My  overriding impression was of being in a 1940’s film, with the unmistakable clipped speech of the characters resounding in my ears as I read.

It was a pure joy to read and I have my fingers crossed that it will be made into a TV drama series, it would make the most perfect viewing.

AJ Pearce grew up in Hampshire and studied at the University of Sussex. A chance discovery of a 1939 womans magazine became the inspiration for her ever-growing collection and her first novel Dear Mrs Bird. She now lives in the south of England.