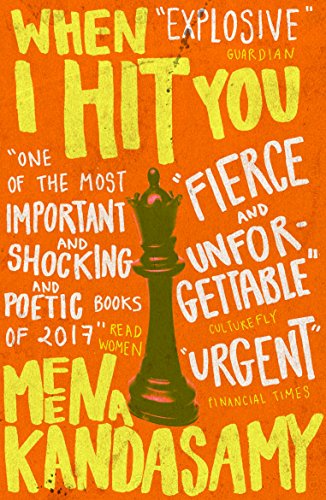 Seduced by politics, poetry and an enduring dream of building a better world together, the unnamed narrator falls in love with a university professor. Moving with him to a rain-washed town, she swiftly learns that what for her is a beautiful bond of love is for him a contract of ownership. As he sets about reducing her to his idealised version of an obedient wife, bullying her and devouring her ambition of being a writer in the process, she attempts to push back–a resistance he resolves to break with violence and rape.

At once the chronicle of an abusive marriage and a celebration of the invincible power of art, When I Hit You, is a smart, fierce and courageous take on wedlock in modern India.

We never know the narrator’s name but we do get to know about everything that happens to her.

Marriage on the rebound after a failed love affair is never a good idea, but swept along by his intellect she embarks on married life. At first all is well, as she continues her writing, communicating with her friends, hopeful of a job and being a diligent wife, but then things start to change. The man, the husband she thought she had married is no more. Restricted to thirty minutes internet per day, no control over her emails, her writing scrutinised, her every move, and action criticised and belittled, our narrator is soon trapped in a nightmare.

It is a nightmare women around the world have suffered and are still suffering. What Kandasamy has done is strip it back to the bare bones, to show not only the physical damage but also the mental damage such a marriage can have on a woman. Our narrator is kicked, punched raped, her femininity stripped away until all that is left is a shell of a woman, an object, for the enjoyment of her husband.

We come to understand that domestic abuse has no class boundaries, it doesn’t matter if we have all the money in the world or have absolutely nothing, it does nothing to  stop the mental and physical abuse against women,

We are aware that the narrator is very intelligent, a writer, a thinker and we read of her own guilt, her own self questioning as to why she endured such trauma. She is a woman who sees running away as a failure, as letting her parents down, of being constrained by what others may think, not only of her but also her family. She is in effect constrained by the society she lives in, a need to conform, to endure.

When she does finally escape, her father still finds the failure of her marriage difficult to discuss, to admit the failure to his friends. Her mother draws on the smaller things, the state of her feet, her hair, avoiding the bigger issues.

As you can imagine the novel is not a comfortable read, but oh my goodness it is good. The writing is superb, succinct and sharp, full of vivid descriptions,and brilliantly evocative. Kandasamy gets to the very heart of the narrator, her innermost thoughts, her turmoil and her pain. It was like someone looking in on themselves, arguing with themselves, justifying their actions to not only themselves but to those around them. I almost felt that our narrator was staying in the marriage as punishment for the bad decision she had made to marry him. You could sense her shame at admitting  to the failure of the marriage, at wanting to leave after such a short time. I was willing her to find the courage to leave, or for something awful to happen to her husband.

It is a novel that will live long in my mind. It is powerful, raw, emotive and harrowing but so deeply effecting. I am not surprised that it has been longlisted for the Women’s Fiction Prize and it deserves to make the shortlist

Meena Kandasamy (b. 1984) has actively sought to combine her love for the written word with the struggle for social justice through poetry, translation, fiction and essays for the last fifteen years. Her debut collection of poems, Touch was themed around caste and untouchability, and her second, Ms Militancy, was an explosive, feminist retelling/reclaiming of Tamil and Hindu myths. Her critically acclaimed first (anti)novel,The Gypsy Goddess, smudged the line between powerful fiction and fearsome critique in narrating the 1968 massacre of forty-four landless untouchable men, women and children striking for higher wages in the village of Kilvenmani, Tanjore. Her second novel, When I Hit You: Or, The Portrait of the Writer As A Young Wife, drew upon her own experience within an abusive marriage, to lift the veil on the silence that surrounds domestic violence and marital rape in modern India.

She grew up in Chennai, India where she lived most of her life before moving to London in 2016.

One thought on “When I Hit You: or A Portrait of a Young Wife by Meena Kandasamy @meenakandasamy @AtlanticBooks”