Jess Kidd’s first novel Himself was a huge success so expectations are high for The Hoarder.

Meet Maude Drennan, Irish lapsed Catholic, and care worker, living in a rented flat in London. She is the last in a long line of care workers sent to Bridlemere to look after the cantankerous and notoriously difficult Cathal Flood.

Whats she finds is a ramshackle mansion full of rubbish and cats and a huge giant of a man who clearly doesn’t want her there. As Maud begins to clear the rubbish so she begins to uncover a house full of secrets, secrets that bring out the worst and the best in the characters she encounters.

And what a set of characters Kidd has created.

Maud, is just wonderful. You get the feeling that she puts her heart and soul into the people that she cares for and Cathal Flood is no different. I loved her no nonsense approach, and her unwillingness to give up on him where others had failed. The changes in their relationship are beautifully emotive and touching, as she slowly breaks down his defences and reveals the awful family secrets. But Maud has secrets of her own. Told in flashbacks Kidd writes of Maud’s troubled childhood in Ireland and her struggles to reconcile and come to terms with the events in her own life. There is a funny side to Maud, its not all doom and gloom and I laughed out loud as Maud wrestled with the Catholic Saints who visited her. There is Saint Dympna, patron of those suffering for nervous and mental afflictions and Saint Valentine, patron of love  all trying to warn Maud not to dabble in Flood’s secrets or to do something right for a change.

Cathal Flood himself, is portrayed as a huge lumbering giant. A man who is unwashed, unkempt and cannot bear to throw anything away. He has a penchant for other people’s cats who run amock in his hovel of a mansion and collecting weird and wonderful antiquities.   As we learn more about Flood and his family so you begin to feel sorry and have huge empathy for him, this man who has lost so much, carrying such unbearable grief and sorrow that he expresses with anger and vitriol to those try to care for him.

Renata is Maud’s landlady and best friend. An ageing transvestite and agoraphobic, ex magicians assistant, she is the wonderful foil to Maud’s reluctance to uncover Flood’s secrets. Renata fancies herself as a detective, finally finding something to lift the mundanity of her everyday existence, even if she gets more than she bargained for. The relationship between Maud and Renata is one based on loneliness, both seeking solace from the other, but also one of deep friendship.

Gabriel Flood, son of Cathal Flood, plays the archetypal villain of the story and you just know that he cares little for his father, intent on only making sure he get what he wants no matter the cost to others.

The writing is superb, perfectly placing you, the reader, in Mr Flood’s rubbish strewn mansion. I absolutely loved Kidd’s description of his wall of National Geographics,

‘The Great Wall of National Geographics is the gateway to the rest of the ground floor, the staircase and beyond. This remarkable structure is not only a barrier to my progress but also a fitting monument to compulsive collecting. It is over twelve feet high and formed by close packed strata (yellow spines aligned uniformly outwards) of the widely informative magazine. Each copy has been placed carefully, with aptitude and instinct, so that the whole has the arcane strength of a dry stone wall.’

The novel is littered with lots of other such brilliant imagery and descriptions that just let your imagination run wild.

The balance between light and dark, funny and serious was just right.  One moment your sharing a characters despair, the next laughing out loud at their antics, Renate and the Saints providing much of the comedy moments.

There was never a lull, as secrets unraveled, and you slowly began to piece together all the pieces of the complex jigsaw.

I experienced a myriad of emotions with a real tug at the heart strings in some places as I felt a real connection with the characters, testament to Kidd’s wonderful writing.

It is not a novel I will forget in a hurry, it is one that will linger, always a sign of a truly wonderful book.

I received a proof copy after attending the Canongate proof party at Cheltenham Literature Festival in October 2017. It was a real pleasure to listen to Jess Kidd read from the novel and talk about the mechanics behind the writing of The Hoarder 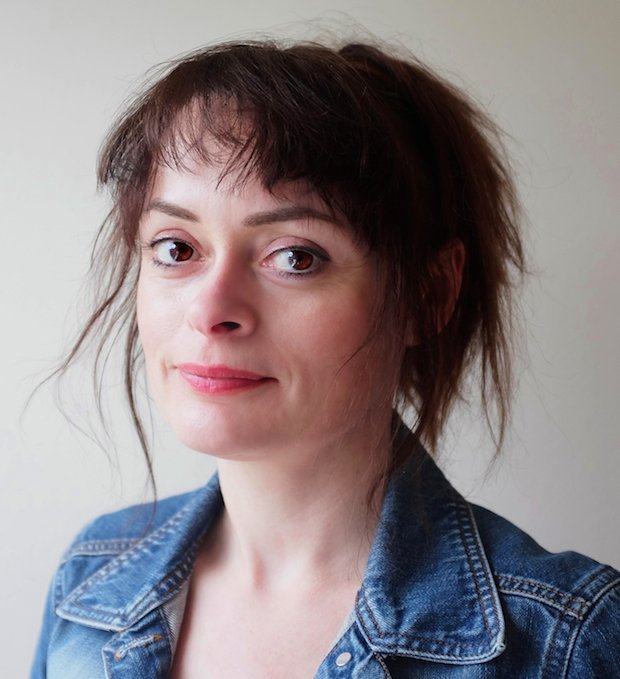 Jess Kidd was brought up in London as part of a large family from Mayo, where she hope to settle eventually. She currently lives in London with her daughter.

Jess obtained her first degree form the Open University and has since taught Creative Writing and achieved a PHD in Creative Writing Studies. Kidd has also worked as a support worker specialising in acquired brain injury.

Her novel, Himself was published by Canongate in 2016. Jess is currenly working on her third novel.