It is 1917, and while war wages across Europe, in the heart of London, there is a place of hope and enchantment.

The Emporium sells toys that capture the imagination of children and adults alike: patchwork dogs that seem alive, toy boxes that are bigger on the inside, soldiers that can fight battles of their own. Into this family business comes young Cathy Wray, running away from a shameful past. The Emporium takes her in, makes her one of its own.
But Cathy is about to discover that the Emporium has secrets of its own…

Cathy Wray is nearly sixteen, and hiding a shameful secret when she reads a circled advertisement in a local newspaper. Seeing it as a means to escape, she finds herself in a  back street of London about to enter a magical world of make believe. Never before has she seen such wonders as when she first enters Papa Jack’s Toy Emporium.

The aisles were alive. She took a step, stumbled when her foot caught a locomotive of some steam train chugging past. She was turning to miss it when wooden horses cantered past in jagged rhythms, their Cossack riders reaching out as if to threaten the train gliding by.

And this is where I, as the reader had to suspend disbelief and immerse myself into an alternative world of children’s make believe and innocence or so I thought.

As we begin to discover, it is not all make believe and innocence in the Emporium.  Kasper, the elder brother, is the toy maker with the imagination and flair, Emil the younger brother is less flamboyant and it is his jealousy that slowly eats away at the magic. War deepens the rift between the brothers and has an impact on those around them with devastating results.

Dinsdale does not hold back from describing the horrors of war and it was particularly poignant to read of the mental trauma that many suffered, after returning home and the lack of understanding of family members.

The characters are wonderfully multi-layered and as events unfold so do the differing sides of their characteristics. Cathy is strong and resilient. Papa Jack is quiet, yet with an immense presence, he is the glue that holds them together. Kasper is outgoing, and exuberant to begin with before events take their toll. Emil is Kasper’s opposite, lacks confidence and self-esteem, forever in Kasper’s shadow, gnawed away by jealousy.

The magic that we discover at the beginning slowly ebbs away as adults lose sight of their inner child, and the world becomes more real. The magical toys are never far away, playing their part, bringing people together, forcing others apart. I did find that I had to push reality to one side for the second part of the story but this in no way detracted from my enjoyment of the story. In some ways it added that extra dimension and uniqueness that is often lacking in todays novels.

The story itself covers quite a long time frame, embracing both the first and second world wars, and it was interesting to see the differing reactions and development of the characters. You never quite knew where the story would take you next, and all I wanted was a happy ending and for the magic to return.

To find out of it if there is happy ending and if indeed the magic does return  I would urge you to avail yourself of a copy of this unique and mesmerising novel. It will sweep you away back to your childhood, it will tug at your heartstrings and totally enthral all who read it.

Thank you to Ebury for providing a review copy and to Josie Turner for organising and inviting mybookishblogspot onto the blogtour. 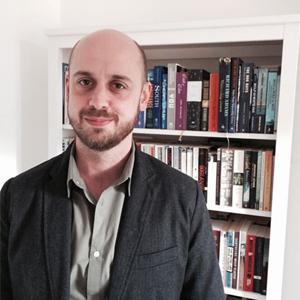 Robert Dinsdale was born in North Yorkshire and currently lives in Leigh-on-sea. He is the author of three previous critically acclaimed novels: The Harrowing, Little Exiles and
Gingerbread. He has a young daughter, and The Toymakers is a book he couldn’t have written without the experience of being a father for thefirst time. The idea for it came to him, almost fully-formed, in a toyshop with his daughter.
The Toymakers is his first venture into magic….