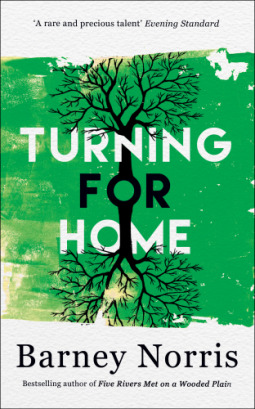 This is the story of Robert and Kate.

Robert is an ex Northern Ireland Minister once heavily involved in negotiations with the IRA, a role that he will revisit all but briefly as The Boston Tapes surface, an oral history of ‘The Troubles’ by Boston College.

Every year Roberts’s family come together at his rambling country home to celebrate his birthday. This year it will be different, his wife dead, no longer by his side, and an event he is secretly dreading.

His Granddaughter, Kate, is dreading the gathering for entirely different reasons. A lot has happened to Kate in the intervening 12 months not least the estrangement from her mother who she will meet at the party.

Told in their alternating voices, Norris delves deep into the psyche of Robert and Kate.

Robert analyses his previous life as a government minister as he remembers the Enniskillen bombings, the academic Frank Dunn the unassuming go between passing messages to and from the IRA. I found this fascinating, remembering for myself the horrors Enniskillen and the devastating effect it had on everyone. We also see the personal side as he tries to reconcile his ministerial life with that of a family, his obvious love for his wife and his grief at her death. I think he also felt quite redundant as a person, and the controversy of the Boston Tapes made him feel useful again, giving him real purpose if only for a short time.

Kate’s voice is the most interesting and most affecting part of the novel.  Norris brilliantly describes Kate’s descent into anorexia, the reasons that drove her to starve herself, using anorexia as a way to regain some kind of control in her life. Her difficult relationship with her mother, her childhood and ultimate road to recovery are all laid bare, in narrative that that is both emotive and compelling.

Both Kate and Robert’s stories appear to be quite separate but there are common themes that slowly emerge.They have both had to face grief, events that have affected them deeply and to find ways to deal with the emotions and ultimately to recover and survive.

I liked the way Norris used characters at the different ends of a spectrum, Kate at the beginning of her life, Robert nearing the end. He shows that whatever age we are we still have to deal with the huge gamut of emotions and events that life throws at us, we just have differing ways of recovering and learning to live with the choices we have made.

The writing is sublime. It is both measured and evocative, Norris gently steering the reader through a novel of love, loss and above all hope.

Five Rivers Met on a Wooded Plain was brilliant and I did wonder if Norris’s second novel would be as good. I needn’t have worried as Turning For Home is different but somehow more accomplished and just as good.

Barney Norris is more than living up to his reputation as one of our best young writers.

Thank you to Sophie Christopher at Transworld for a proof copy to read and review.

Born in Sussex in 1987, Norris is an award winning playwright, poet and essayist. He received a BA from Keble College Oxford and an MA from Royal Holloway, University of London.

Norris founded the theatre company Up In Arms. He won the Critics’ Circle and Off-westend Awards for Most Promising Playwright for his debut play Visitors.

Norris has also writte 2016.n for The Guardian and The Independent.