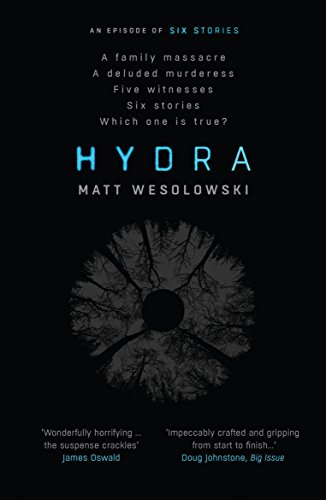 Arla Macleod is 21 when she massacres her mother, stepfather and sister in anapparent psychotic episode that becomes know as the Macleod Massacre. Locked up for life in a mental institution investigative journalist Scott King is the only person she will speak to.

Famous for his ‘Six Stories’ podcasts King is slowly immersed in Arla’s world picking apart the events leading up to the massacre, interviewing five people who knew her and trying to understand why she killed her family. Was it really diminished responsibility, did Arla know exactly what she was doing?

Having not read Wesolowki’s Six Stories and having heard and read all the rave reviews I was intrigued to discover for myself why he is such a good writer.

What I particularly enjoyed was the unique structure of the novel. Told via six podcasts, and interspersed by the thoughts of Arla and King we are slowly able to garner not only an insight into Arla’a past life and character, but also how she was viewed by others. Seen as a loner with what others would call odd tendencies, she is a complex character, perhaps as a result of her family background. A cold somewhat uncaring mother, a deeply religious and strict stepfather and a younger sister, who can do no wrong, obviously the favoured daughter and you can perhaps understand why she finds life so difficult.

What I didn’t expect was the dark and eerily creepy quality that Wesolowki brings to the novel. Arla’s fascination with goth singer Skexxix, his rituals and the black eyed children add an extra dimension to the novel that I found very disturbing and I would recommend you do not read in the dark!

The insights into Arla’s mental state are extremely well done and in some ways you cannot help but feel sorry for her. Maybe if her parents had invested some feeling and time into Arla she would not have found refuge in the online world.

King is a mysterious figure, always wary of revealing his identity, seemingly fearless until he too becomes involved in Arla’s story as he begins to receive threats, warning him to step away from the story. I loved his tenaciousness, his unwillingness to give up despite the fear he felt, adding that extra bit of drama to the novel.

The writing is fantastic full of amazing imagery, and wonderfully atmospheric. It is multi layered each podcast unraveling another angle, another revelation, surprising the reader as the plot takes yet another turn.

This is a novel that will hook you from the first page, it will draw you into to a dark and murky world, and is a story for todays media driven society.

I loved it and now need a copy of Six Stories to get another fix of Matt Wesolowski’s fabulous writing. If has a spare copy please send!!

Thank you to Anne Cater for organising the blogtour and Orenda Books for a proof to read and review.

Matt Wesolowski is from Newcastle-Upon-Tyne in the UK. He is an English tutor for young
people in care. Matt started his writing career in horror, and his short horror fiction has
been published in numerous UK- and US-based anthologies such as Midnight Movie
Creature Feature, Selfies from the End of the World, Cold Iron and many more. His novella,
The Black Land, a horror set on the Northumberland coast, was published in 2013. Matt
was a winner of the Pitch Perfect competition at Bloody Scotland Crime Writing Festival in
2015. His debut thriller, Six Stories, was an Amazon bestseller in the USA, Canada, the UK
and Australia, and a WHSmith Fresh Talent pick, and film rights were sold to a major
Hollywood studio..