Oakenshaw, Yorkshire, 1932 and Billy Shaw is happily helping out at Potter’s Pleasure Palace, an old mill turned into ‘the best entertainment venue in Yorkshire’ His Ma along with sisters Maud and Peggy run the highly successful tea room. Life is good until Billy’s life is turned upside down when Mr Potter answers an advert and sends him off to the house on the hill, High Hob, to be the companion of Jasper Harper, a boy of similar age, but not definitely not similar in nature. Jasper lives with mother Edie and her brother, Charles. Both are  authors who have fled the hustle and bustle of London to write in the relative quiet of Yorkshire.

Billy’s life changes from the moment he steps over the threshold. Edie and Charles are  so wrapped up in their own worlds they care little about Jasper’s increasingly wayward antics.  Billy remains Jasper’s companion for four years before fleeing to London as the bodies of Charles and Edie are found, both dead, the result of an apparent suicide pact.

Fast forward to present day and Anna, is the new new custodian of Ackerdean Mill, once known as the Palace. Anna wants to drag Ackerdean Mill into the present day attracting new visitors and as she begins the task she chances upon documents relating to Charles and Edie and begins to doubt the suicide verdict and it is not long before old secrets begin to surface.

Written using a dual time line Dunnakey is wonderfully adept at using this device to slowly unravel Billy’s life, the clues and revelations that Anna discovers from the people she meets in the village and the documentation and photographs she unearths.

Dunnakey’s writing is such that as the two narratives intertwine the reader is pulled one way and then the other until finally earth shattering secrets rise to the surface. and the story reaches its dramatic conclusion.

The characters are beautifully portrayed. I especially loved Billy. A sensitive boy with a love of birds, with the drive to make something of himself despite all the obstacles placed in his way.  Even Jasper had some appeal despite his violent and mean tendencies.

What really stood out for me was the imagery and the setting. I found myself transported to the wilds of the moors, feeling the warmth of the sun in the summer and the desolation and bleakness of winter. As a Yorkshire lass born and bred I felt quite homesick at times!

This novel had everything. Its a mystery, a love story and a historical novel all rolled into one and I loved it.
Thank you to Louise Oliver and Orion for the proof copt=y to read and review and the opportunity to be part of the blog tour. 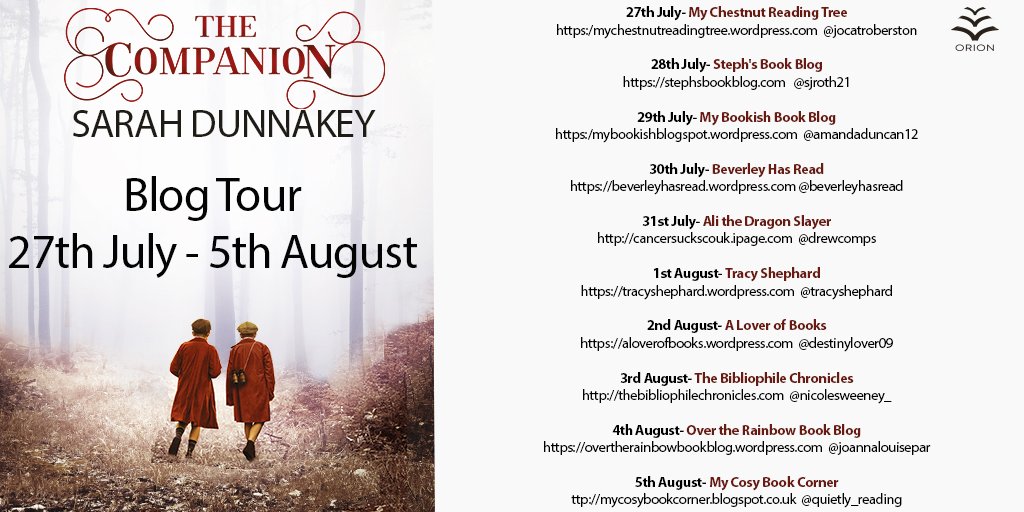 Sarah Dunnakey was raised in Yorkshire and Teeside, She has been a librarian, a Victorian education officer and a researcher before becoming a question verifier for Mastermind and University Challenge.

In 2014 Sarah won a Northern Writers Award for ‘The Companion’.

Sarah lives in West Yorkshire with her husband and teenager.