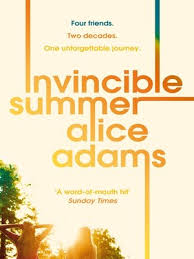 1995 and four friends leave Bristol University to embark on their chosen careers and paths in life, all determined to stay in touch.

Lucien, and Sylvie, brother and sister intend to travel. Sylvie will then pursue her dream of becoming an artist, whilst Lucien has no real notion of what lies ahead.

Eva decides on a career in the high octane world of banking and Bennedict a PHD in physics.

Their lives will be inextricably linked over the ensuing 20 years, as careers reach dizzying heights, and life takes unexpected turns.

Whilst each character has their own story and are very different, Adams uses them to show the various themes of the time, from the greed and financial crash of the banking sector to the rise of the drug fueled club culture.

As in real life, arguments, marriage, and children force them apart for long periods of time, but the friendship remains pulling them back together time and time again.

The characters in the novel are like able, and believable but there is a distinct predictability about them, it doesn’t take the reader much to guess what happens next. There is one exception that took me totally by surprise!

The novel itself is well written, but for me I found it lacked a little depth. The ending was also a little disappointing.

Criticisms aside this is a hugely enjoyable novel and it a definite one to pack on your summer holidays.